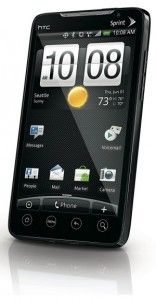 It's that time of the year again when cell phone makers dish out such ridiculous specs on some new phones that we literally need to pick our jaws off the floor. Though we don't normally report on anything that comes out of CTIA at Videomaker, there's one phone with specs so wild, that its story literally needs to be told. At the CTIA conference, Sprint revealed a new EVO 3D phone that is capable of both shooting and displaying 3D content. In addition, the feature-packed handset is sporting a 4.3 inch qHD 960×540-pixelauto-stereoscopic3D display, 4 GB of ROM memory, a full GB of RAM, a super speedy 1.2 GHz dual-core Qualcomm 8660 Snapdragon CPU, and two sets of cameras: a front-facing 1.3 megapixel and rear dual set that can shoot at 5-megapixels. Most exciting of all, the device is able to both capture in Full 1080p HD in 2D, and 720p in 3D. What this means is that HTC has officially brought 3D content to everyone. If people are able to quickly get 3D footage on their phones, there can be no doubt that they'll soon want to buy a 3D display so that they can show their friends their latest attempt at a viral video in all of its 3D glory. Of course, HTC is not the only company that has been hopping on the 3D bandwagon. Sony announced several 3D cameras aimed at consumers at CES along with their 3D F-Series VAIO and 3D editing capabilities in Sony Vegas 10. Panasonic has long had 3D cameras, and JVC also decided to jump into 3D with their newest prosumer offering. With all of these tools available, you can be sure there will be plenty more 3D content in the near-future. Now before anyone gets going, I already know that there are plenty of challenges to getting "good" 3D. I also realize that taking 3D footage with something as small as a cameraphone will might possibly lead to some of the worst looking 3D content of all time. However, this announcement officially breaks the last barrier to inexpensive 3D filming and that is definitely something that we should all be able to celebrate. Of course, we will have to see how the camera performs before we get out the cake and decorations just yet. Either way, with Android Gingerbread 2.3, HTC's Sense UI, and the ability to output 1080p video or 720p 3D video over HDMI, you'll also have a really capable phone to boot.