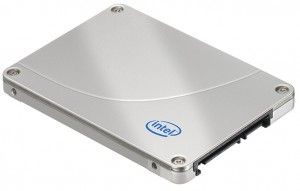 Well, it’s finally about to happen. Intel announced that they’re getting into the world of high capacity drives by releasing a new line of solid-state drives all the way up to 600 gigabytes. The new drives are the third generation of Intel’s SSD 320 Series. The new series is an upgrade to the high-performing X25-M SATA by using Intel’s new 25nm manufacturing process. With this process, Intel is able to shrink the size of the chips that the flash memory is held on making it possible to fit more flash memory within a standard 2.5 or 3.5 inch drive enclosure.

The new series comes in 40, 80, 120, 160, 300, and 600 GB flavors and will be using a 3 gigabit per second data interface for fast transfers. However, with 6 Gb/s SATA interfaces available, it’s curious why Intel decided to go with the much slower 3 Gb/s interface. The solid-state drives boast up to 39,500 input/output operations per second of random reads and drops to 23,000 IOPS of random writes for their high capacity drives. Read and write speeds have also doubled from their last drives at 270 MB/s and 220 MB/s.

This announcement finally makes solid-state drives large enough to handle the typical HD workload at speeds much faster than any disk-based hard drive can achieve. Though the drives are rather expensive going all the way from $89 for the 40 GB model to a whopping $1,069 for the 600 GB model, they can still be worth the cost for many who need better read/write times and reliability. Many of these drives will still be out of reach for the average video enthusiast, but this latest announcement from Intel shows that the technology is heading in the right direction. It’s no stretch of the imagination to think that someday a few years from now almost every video editor could be using a RAID full of inexpensive, 1 TB, solid-state drives.