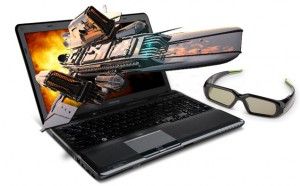 Watching media in 3D is coming to the latest laptop from popular manufacturers, Sony and Toshiba. Sony introduces 3D as a simple conversion by dedicating a button to view HD DVD or Blu-ray to 3D.

Whereas Toshiba is quickly working to get 3D available without the use of stylized glasses via the internal web cam. Viewing 3D content is certain to get tricky with multiple viewers, but likely, a single user will be gaming or editing, so glasses may be the most dependable method. The two-hue glasses are included and should be safely regarded as any other computer accessory as there is no guarantee that movie theater glasses will maintain functionality. Coupled with solid laptop design, both companies are putting this 3D in grabbing distance at $1,300 from Toshiba and from Sony, estimated around $1,700.