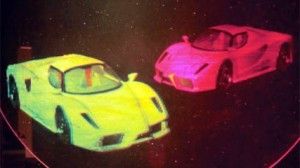 Well, it was inevitable. The scientific journal Nature reports that scientists at the University of Arizona have announced that they have created the first 3-D holographic moving images. Anyone remember the “Help me Obi-Wan Kenobi, you are our only hope” line in Star Wars? Well, that is apparently firmly in the realm of possibility now. The technology was achieved by first, filming an object with an array of cameras (making this venture already too expensive for the average video enthusiast), then transmitting the resulting video data into a machine that can read it and control a series of lasers to produce an image. These lasers work by an interference pattern when one laser collides with another producing a glow. It obviously takes a high degree of precision and as such, moves much like Princess Leia did in her hologram: with a lot of jerky movement. Additionally, the image is currently being broadcast on a 10 inch monochromatic screen and refreshes at a rate of one image every two seconds, much too slow for any conventional use.

All of that aside, the possibilities of this kind of technology, once improved are vast. Since it is possible to go around the image and view an object at different angles, there is no doubt that this technology would be far more realistic than what we see on screen today. Additionally, with the real-time broadcast of 3-D images, it could be possible to broadcast interiors of homes, surgeries, and planets in space to experts around the world. Not to mention the possibilities this technology would have in the live television and teleconferencing world. Imagine being able to shoot a speaker and have it broadcast as a full 3-D hologram to people all around the world. The only problem: the technology won’t be available for 10 years – meaning you’ll have plenty of time to brush up on your holographic filming skills. Of course, you may want to brush up on a few good video capturing tips here first!