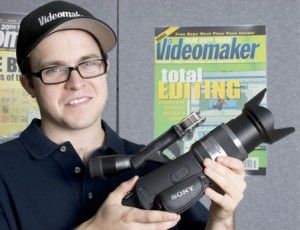 Sony shipped the new NEX-VG10 to the Videomaker headquarters for an exclusive 48 hour hands on review. At first glance it looks more like a camera you would find in the hands of a pro rather than a consumer but at a closer look the NEX-VG10 is extremely simple with very few buttons and options.

When I picked up the NEX-VG10 the weight of the camera was quite noticeable right off the bat, the NEX-VG10 weighs in at 3 lbs fully loaded with the weight shifted more towards the front of the camera where you can find the E-mount 18-200mm lens that ships with the camera. It also was a little odd holding a consumer camera without a zoom control whichultimatelyseparates this camcorder from your typical Handycam geared towards home movies.

Most of the functions are done within the menu which is quite easy to navigate and the graphical user interface(GUI) resembles the top dial commonly found on most DSLRs. The NEX-VG10 records onto SD/SDHC/SDXC or Sony’s Memory Stick Pro Duo cards which is quite convenient.

The images we captured with this camera are remarkable, although it shoots in 60i it does a have a cinema styled look to the footage it captures, it would have been nice to see 24p on this model. The audio the NEX-VG10 captures is also exceptional with it’s quad capsule stereo microphone.The bottom line the NEX-VG10 has lots of features found in HDSLRs but in a camcorder form factor that is moreergonomic. We will have a full review up soon!