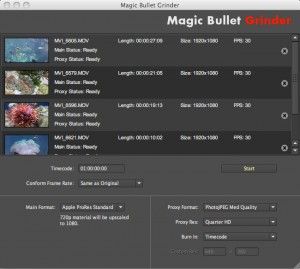 One of the more mysterious aspects of video editing is the use of proxies. The very word can strike fear into even the most confident of video editors and make beginning editors decide to start a new career. However, with the onset of high bit rate HD video editing, proxies have become a necessary evil. Just recently while working on the newest how-to video on shooting reception videos, I decided I had enough. Previewing my Canon 1D Mark IV footage natively on the laptop I was working on was like watching molasses dripping into a bucket in the middle of a North Dakota winter. In other words, it was unbearably slow. As a result, I decided to go online and figure out this proxy editing thing once and for all. I already had some knowledge having gone through several forums and news stories on the subject, but never really figured I’d need to use it. Boy was I wrong. I mean, when waiting for Premiere to spit out even one frame of the 45 Megabit per second HD video is less preferable than watching Robin Williams play Popeye, you know something has to change.

My search led me to all sorts of places on the net, but eventually I found the best solution was using either MPEG Streamclip, Compressor, Adobe Media Encoder or Super to make quick proxy versions of my files and then rename them with the Bulk Rename Utility. In case you were wondering, the best encoding settings were either ProRes Proxy (if on a Mac), or H.264 at about 3-5 Mbps (on Windows). At that point, it was possible to edit with the proxies scaled to the size of the source footage. Even though I lost a little quality, I more than made up for it in saved time. Instead of waiting for hours for my footage to render, I was able to watch my edit in real time which is crucial in order to get a “feel” for the edit (and not get mind-numbingly bored). Once I was finished with my edit, I simply reconnected my footage with the original source footage and because it had the same timecode and video settings, I was able to render it without any hiccups. I’m not going to lie to you though. Even though this method saved me time and effort, it still required two programs and an awful lot of time, which really wasn’t cool.

That’s why when the popular plug-in maker Red Giant released a piece of software called Magic Bullet Grinder this week, I breathed a huge sight of relief. This software allows you to convert your DSLR video to edit-friendly formats, add timecode, and generate proxies all in one click. Now, instead of going through multiple processes in order to get your footage ready for proxy editing, you can convert your footage to either ProRes or PhotoJPEG format and edit them easily in your timeline. The good news is that these formats are easy for your computer to ingest and preview in real time. Their software even fully utilizes multiple cores in a computer by assigning each encoding process to a core. This means if you have a new 8 or 16 core computer, you can render 8 to 16 videos all at the same time! This feature by itself definitely makes this software worth checking out. They also have a feature that burns timecode on your video file, ensuring your video is lined up perfectly when it comes time to reconnect.

As much as it makes your body flinch to hear the words “proxy editing,” it can be the best way to save time on your edits, especially when using high bit rate footage. Just like getting shots as a kid was scary, yet quick and relatively painless, proxy editing is one of those necessary evils that is surprisingly easy to do. Once you’ve made proxy editing a part of your workflow, I’m sure you will be wondering how you ever got by without it.