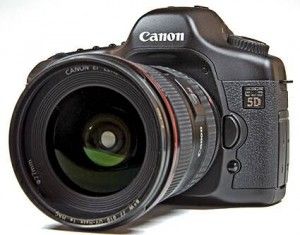 Due to their beautifully captured footage and high quality lenses, DSLRs have seriously captured the hearts of filmmakers the world over. In fact, if you were at NAB this year then you no doubt know that this was the year of 3D and the video DSLR. Everywhere we looked while running to and fro on the show floor there was at least one person holding a shiny new DSLR camera. Even Videomaker this year decided that in order to get the best quality possible for our readers, that we would use our Canon 1D Mark IV to capture interviews. So when we spotted the kind people from Cinema 5D with a sleek looking DSLR rig, we decided to figure out just exactly what equipment they had and why they went the the DSLR themselves. Ironically, they were using the cousin to our camera, with their Canon 5D camera mounted on a Redrock Micro DSLR cinema bundle shoulder mount, a LitePanel Micro, and a Sennheiser shotgun microphone. It’s seriously enough to make your mouth water. Even though we didn’t have a nice Sennheiser microphone and a shoulder mount, our interview with Cinema 5D’s News Director Jared Abrams still ended up looking beautiful. Check out their rig in it’s full glory in the video after the break!