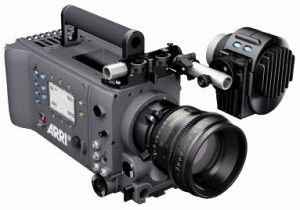 This is a very exciting time for videographers, cinematographers, and filmmakers alike. With the introduction of video DSLR cameras by Canon and Nikon in the past few years, along with RED’s announcement of their high resolution digital still motion picture cameras, traditional camcorder manufacturers have no doubt been feeling some real pressure to rethink their approach to filmmaking. With their announcements, Canon, Nikon, and RED proved that prosumers were looking for more than just a new recording medium, they were looking for the flexibility of super high resolution images and the beauty of interchangeable lenses. Not to be undone however, ARRI, Panasonic, and Sony have come back in full force with their exciting new high resolution camcorders.

At this year’s National Association of Broadcasters show, or NAB, ARRI surprised everyone by announcing the specs on a new camcorder named the Alexa. This camcorder, with its 3072 x 1728 resolution, was the first indication that traditional camcorder companies were finally listening to the prosumer world. It wasn’t hard to figure out that there was a high demand for such a product. All over the blogosphere, there were people literally begging Panasonic, Sony, and JVC to put their DSLR technology inside of a traditional camcorder body. With the superior depth of field and image quality, DSLR camcorders were the natural progression camcorder companies all around the world. Videomaker first realized this when we received both the Canon 7D and 1D Mark IV for review a month back. As soon as we turned these cameras on and saw the images they produced, it was obvious that filmmaking had reached a whole new level. It even took our productions up a notch when we used them for our weekly vidcasts.

With that being the case, it was really interesting to see the types of cameras that each of the major camcorder manufacturers introduced at NAB. First, for those with more money than they know what to do with, the Alexa camera from ARRI offered up a slew of mouth-watering features for filmmakers. The camera has just about everything that filmmakers have been looking for with a true 1/1000th adjustable frame rate from 0.75-60, A RAW recording format for highly editable images, and a 1/10th precision shutter from 6 to 359 degrees. Next, Panasonic in it’s eye-opening press conference announced an AVCCAM 4/3 sensor camera with 2 XLR audio inputs and variable frame rates all recorded on SDHC flash cards. Last, but not least, Sony also joined the fray by quietly revealing a small form factor 35mm camera with a built-in microphone and swing-out LCD panel. All of these cameras showed that ARRI, Panasonic, and Sony were ready to embrace the demand for 35mm digital filmmaking.

There is almost no doubt that when these cameras are released later this year and next, that they will change filmmaking in much the same way Panasonic changed filmmaking with their 24P cameras. Granted, like all technology in its infancy, there will be some issues, but overall the effect will most definitely be positive. That’s why now is such an exciting time for video enthusiasts. It is finally now possible to create an independent film with all the same tools as Hollywood cinematographers have at a price (~$6000) that at least some of us can afford.