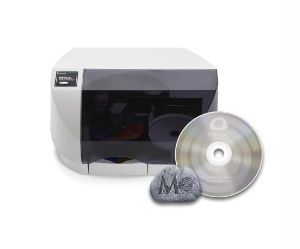 Everyone is getting into the video creation field, either as a hobby, a business or just to save precious memories for future generations. From harddrives and flash cards to “sendingit to the cloud”, where do you think your footage will be in 1000 years?

Will you be able to access the Cloud? Or would that company storing it have crashed and burned by a century from now? What about tape? Flash drives? DVDs? what media collecting format in use today will still be in use in 2110?

If youre burning your files to a DVD do you ever wonder how long that DVD will last until time and the elements take over? We met up with Primera Technologies at NAB last week and they showed us some new innovative technology with Millenniata, a company they are partnering with for long-term storage.

Millenniatahas created the M-writer 100 year disc, and thats not just marketing babble. The technology is different than any disc technology out there, was tested by NASA and is being used by the Library of Congress.

Unlike other discs, the information used on theMillenniata M-writerdisc is not organic, meaning it wont break up over time or from light or heat. Inspired by centuries old American Indian rock carvings, the inventor created a process that etches, rather than burns, your important information onto the disc.

At $22.00 per disc, (yes, that is not a typo), this disc is not cheap, and its not meant to be. This is they type of service one would offer to a bride and groom as a way to make their memories last forever, a way to sell to the medical industry a long-term archiving system, and even government agencies and corporations need to have secure discs that wont melt under pressure.

Primera Technologys M-DISC works with its Bravo Disc Publisher duplicator and the software comes at no extra cost.

. (And you can get a free etched Millenniata Rock online)

To find out more about archiving and long term storage, read these stories in Videomaker.