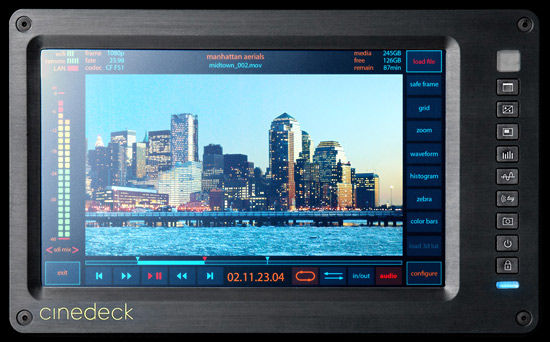 Have no fear mini-DV, you who were once held dear by cinematographers the world over only to be pushed aside as the world embraced hard disk drives. It's finally time to hold your head up high as even newer technology makes those hard disk drives pale in comparison.

Cinedeck has just released a new direct to disk, or DTD device that has finally addressed all the issues of recording to a HDD based DTD…and then some. It's called Cinedeck Extremely Portable Direct to Disk Recorder. Don't let the name fool you, there is no disk with moving parts in this sleek device. Instead, the Direct to Disk records to solid state RAID drives bringing with it all the ruggedness of SSD's. This is especially great news for cinematographers who have been forced to compromise while shooting in the kinds of harsh environments where HDDs don't dare to go. Curiously enough, the Direct to Disk Recorder also doubles as a fairly powerful computer which can be used to make simple cuts of the footage that you record on it. It also comes with a TV and VGA out allowing you to use a larger second monitor when editing, giving you the coveted screen real estate that you need. You can still use the high resolution 7 screen while plugged into a second monitor salvaging some use for the device even while editing on a larger screen. Click past the break to find out what's so unique about Cinedeck's product.

What's so unique about Cinedeck's product is that it combines a lot of the devices that you've been forced to use in the past into one four pound 4x5x8 machine. You can record on its super fast SSD RAID drive, use it as a color accurate field monitor, and then to top it off, rough cut your project on it as well all while being whisper quiet. This is a direct result of the Disk Recorder's Intel Core2 Extreme quad qx9300 processor, which allows it to dual boot into both it's own intuitive operating system which you can see in the picture below, and Windows, giving it some real potential for code-writers everywhere.

With the incredible ability this device has, the biggest hurdle is not the connections in and out of it, instead the real problem come in justifying the price tag which comes in at $7995.