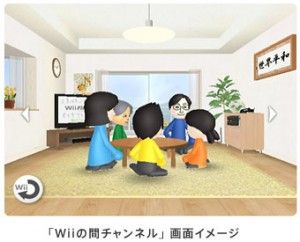 However, Nintendo looks like they are the first to offer gamers a new way to view original content withit’s new video on-demand service Wii no Ma.Which contains a rather interesting interface that allows gamers to select the program they want to view with their self created Mii characters while they characters are relaxing at home inside the living room. It’s a great new idea to the gaming world that Nintendo is hoping will grab reluctant consumers and get them to try the Wii for it’s interactive experience. The big vision would be to have a family sit down and watch original programing on the Wii, rather than by standard means. Which is a very interesting concept that got me thinking.

Why not offer the ability to post new content to a user generated channel for all of the video enthusiats out there, that just happen to be gamers? Giving them their own version of a Youtube… Wiitube! And for that matter, why not add to the idea and allow other Wii created characters to join you in a virtual living room to watch your work? Have scheduled screenings and be able to rate the videos that are being streamed on a featured channel?

Well that’s just my idea, what about you?