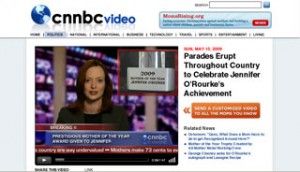 Here’s a quick and easy way to delight that special mom you know via a viral internet video with a very “Onion-ish” flair.

My friend Florence sent me this “news” link of a fake CNNBC-video broadcast, that honors ME with a “Prestigious Mother of the Year award given to Jennifer” award.

Sound bites are taken from real newsclips from President Obama and others that also includes man-on-the-street interviews, all supposedly lauding my wonderfulness.

Laid out to look like a real CNN or MSNBC newscast, with the fly-in graphics and lower-third text scrolls, the video can be personalized for any name you select by finding the large orange button that says “Send a customized video to all the moms you know”.

I have to say, I was moved to tears by the words, even though they were all made up because, gee whiz, all people like to receive accolades from time to time and most parents never receive them other than a sappy impersonal card on Mother’s or Father’s day.

One of my favorite shots is a clip of a large rather threatening-looking guy with the classic “Mom” surrounded by a heart tattoo crossed out and my name added in. Along the bottom are supposedly other “clips” to link to, one stating that “George Clooney asks for O’Rourke’s autograph and Lasagna Recipe”. Hum. I’ll have to try to whip a GC Lasagna Special in my spare time this weekend!

Although I’ve been in the video-creating business for almost 30 years, I’m still amazed at the magic involved in making it all come together, and I love seeing videos like this because I know about the techniques it takes to create something so clever.

Viral videos are fun to share, as long as they don’t send viruses along the way. This one was created by the MomsRising.org group, an organization that works tirelessly at trying to bring women and children’s issues to the forefront of politician’s focus, who, in turn, are endlessly slashing funding for basic rights as childhood education.

When you check out the link you’ll want to send one to your mom, wife, daughter, sister, grandmother and every other mom you know.