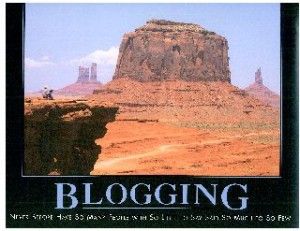 A while back I wrote about the crazy Twittering life many people have gotten into, sending updates about everything theyve been doing in their day-to-day routine. As if the world cares. Yet it seems like everyone, even

Twitter, Facebook, MySpace and LinkedIn; networking sites just to connect with anyone and everyone. YouTube, text messaging and photos and video over mobile phones; sharing inane data on any subject to anyone anytime. Someone gave a page from a calendar with the caption: Blogging Never before have so many people with so little to say said so much to so few. It shows a woman working on a laptop sitting on an incredible ledge over-looking what looks like Devils Tower in Wyoming from Steven Spielberg’s 1977 movie, Close Encounters of the Third Kind. I love it. I hung it in my cubicle.

Recently several friends from my old life in TV news found me on my social network site, and they sent my link to others who contacted me who sent my link to others.. I spent nearly an entire work-day just connecting, reconnecting, and catching up. Then what? Does everyone really have that much time to talk about themselves so much? Where do people get the time? When did we stop stopping to smell the roses and begin to blog about them, instead? Am I the only one out there who cant see the what all the talking is about?