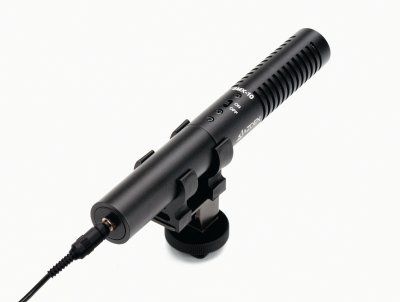 Azden makes a lot of microphones well suited for the video hobbyist because they're generally less expensive than the competition and when it comes down to it, they get the job done. The new SMX-10 falls right into that category going for $100 and features a 100Hz to 18kHz frequency response with a -40dB sensitivity. One slightly strange feature is the built in roll-off at 200Hz that unfortunately can't be switched off. For most shooters trying to capture dialog this is ideal, but for capturing sound effects and other ambient sounds, the bass tones might add a lot more depth to your audio even though you might end up rolling them off in post. Yes, we're being a little too critical here as most mics do have some sort of roll-off filter. However, we think giving hobbyists more control is a good thing. In the end, the SMX-10 (equipped with a 1/8" audio jack) is a great step forward for anyone still using their onboard mic. Keep away from those darn onboard microphones, they're nothing but trouble.