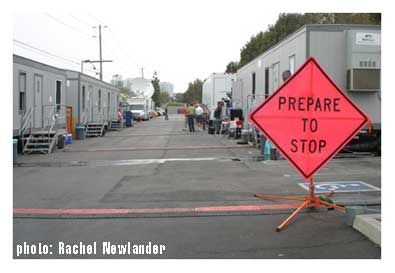 Live Earth, a global campaign for climate change, converges an International, environmental consciousness through entertainment while streaming every moment of it (140 hours of video content) to anyone with a high-speed Internet connection. How does Spinal Tap in London, Ludacris at Giants Stadium, a presentation from Naomi Campbell in South Africa, Linkin Park in Japan and other entertainers from concerts across the globe make it to your PC all in one day? It's the task Incited Media took on, amounting to this temporary video village (top image), tent-staked in a parking lot in Los Angeles, California. [image:blog_post:14108]The Backend of Live Earth Incited Media was receiving 10 live feeds (9 stages, plus a world feed) from a satellite tying together seven continents. Each feed was encoded and streamed live and then each music performance broken down (captured and encoded) into separate tracks for On-Demand. Preparing for this 24-hour event took Joe Einstein and Ben Rolling, the co-founders of Incited Media, three months on non-stop planning. Although this was the most amount of content they've ever processed in such a short time, it was essentially the same technical beast that Einstein and Rolling have faced in prior projects. The Back-story of Incited Media Incited Media's back-story, which includes their ironic launch a few months after the dot-com burst (mid-2001), really begins to pick-up with their work on Live 8, a series of benefit concerts distributed via AOL. Rolling notes that the AOL webcast of Live 8 really showed for the first time that webcasting this type of an event could be done. And, not just in terms of the technical issues and getting the numbers right (finding your audience and mixing in the advertising). Einstein adds that what made the Live 8 event successful was the coverage, most importantly, un-moderated coverage. [image:blog_post:14109]Back to Live Earth During our discussion with Incited Media, we touched on some recent events in webcasting where moderated coverage had it's own setbacks. Rolling tells us that Live Earth decided on running disclaimer slates to warn viewers of potentially unsuitable material. But, un-moderated coverage is more than a topic on censorship, it's about letting viewers choose their own experience within multi-path/multi-camera events. Leaving decisions for the end user about what they will experience. Rolling says how unusual this can seem, "when the band is done playing you have a shot of an empty stage," as opposed to Broadcast TV where the viewer at that moment is swept away to the next predetermined program. At that moment for the webcasting viewer, maybe the experience is to continue that live feed or move onto other performances or interviews perhaps taken moments earlier via On-Demand, or move to another live stage in a different part of the world. This idea of interaction is not a revelation, but a realization that this is the nature of webcasting as a medium. That's where the greatest gains will be for webcasting. This is especially true, as Rolling points out, with un-moderated, multi-camera sporting events. That's something for the future, but could become a reality much sooner than expected. The future of webcasting as a dominant medium for mass communication remains somewhat uncertain, yet it's proving to be area of tremendous growth. There maybe a time in the near future where the corporation you work for, or your production company, or your local broadcaster will be webcasting themselves. So we asked Einstein and Rolling to kindly share a few simple tips with us so that anyone breaking into the webcast realm will be standing on their feet at the end of the day. Einstein stresses that the key to webcasting is building your strategy for content management, down to the specifics of what your naming convention should be, all the way to what player the viewer will be using. When building your strategy you should also consider how viewers will get to that content. A strategy for using metadata or some other tool for managing enormous amounts of information is also critical. Einstein highly recommends finding a consultant who can pick out those trouble areas before they become week long headaches. Additionally, Rolling stresses, to all things related to asset management, the importance of quality control. "So many people publish without ever checking their work," Rolling states. This leads to broken links among other things that ultimately keep the viewer from seeing your content. In the seemingly infinite possibilities of a webcast, a dead end is as good as dead air. SIDEBAR After our brief chat with Joe Einstein and Ben Rolling we were looking at several pages of notes, dominated with jaw-dropping numbers from the Live Earth webcast. We'd thought we'd leave you with the list. [image:blog_post:14110]Live Earth webcast by the numbers: 3 months of non-stop planning 24-hour webcast event 80 technicians, editors, programmers and translators 9 Live Stages 1 Live World Feed 140 hours video 700 tracks of on-demand video 30 machines to encode video 26 live encoders, each doing a Windows Media and a QuickTime format a team from EVS 90 servers at the encoding farm (not a single server crashed, by the way) 2 billion estimated world-wide audience (source: Live Earth) 15 million video streams during the live event (source: Live Earth)