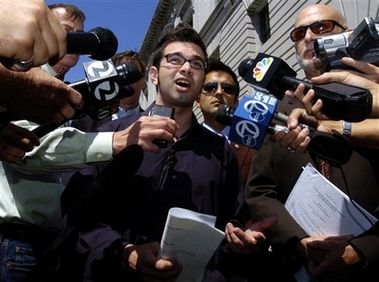 Just when you thought we'd forgotten about a certain video blogger, we go and post this: Josh Wolf was released from prison in Dublin, California earlier this month to the tune of a tidal-wave of media attention. His blog entry from April 9th tells a bit about his first few days as a free man. The focus has shifted, though, from questions regarding his status as a journalist, to questions over how our court system treats modern journalism. Josh became the the longest incarcerated journalist in US history for refusing to turn over his video footage (as evidence) recorded in San Francisco in 2006. Josh spent 7 1/2 months in prison before his release on April 3, 2007. I've marked my calendar to celebrate the anniversary next year. photo courtesy of jameswagner.com