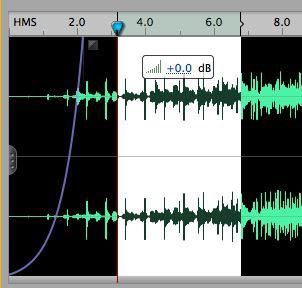 Adobe announces a new audio software tool for video and multimedia creators called Soundbooth. With the increase of video enthusiasts (especially in the online and podcast arena) and the demand for simple yet powerful audio editing tools, Adobe has reorganized it's audio software offerings and brought Soundbooth to life. Adobe is soliciting feedback from the public beta version of Soundbooth before it commits to an official release. Eventually, Adobe plans to migrate the new software to the Video Production Studio creative suite. This, of course, will mean that Adobe Audition will be removed from the bundle, where its future will be focused as an audio product for audio professionals. There's no news as to when this transition will happen. Several days ago, Adobe took us through a demo of Soundbooth that left us impressed with its brand new interface and ease of use. One of the main visions for this product was to create an interface that helps visual artists take control of audio properties and has a "discoverable flexibility," which allows beginning users to approach the program more easily. This is possible with Soundbooth's task oriented user interface, rather than a tool oriented interfaced, as in Adobe Audition. Soundbooth also has a loop-based music creation feature, complete with key-framing moods, tempos, intensities, etc. Its interface, like most of the software applications in the Video Production Studio suite, is ideal for moving between your video editing timeline and the audio editing features. [image:blog_post:14193] Adobe is hoping Soundbooth will become a common tool for creative visual artists on both platforms, Mac and PC. Soundbooth also includes greater interactivity with Flash, allowing users to create and export cues to work with Actionscript. Pricing and availability will follow after the public beta testing is complete. Look for more Soundbooth news and announcement in the future.