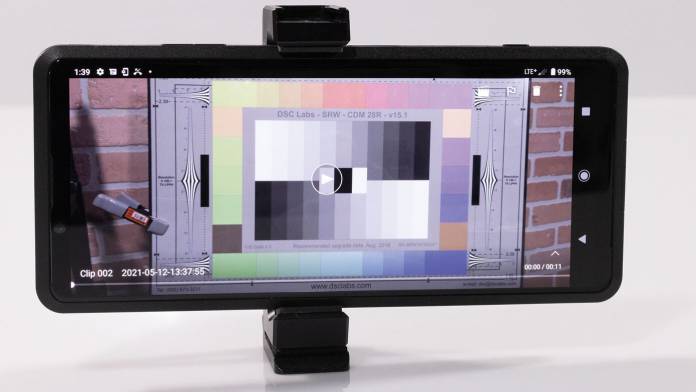 How many times have you looked at your phone and had a thought like, “it would be great to use this as a monitor when shooting,” dance across your mind? There are third-party products that make that possible, but none with native support straight from phone manufacturers. Until now, that is.

Sony’s new Xperia Pro is the first smartphone with an HDMI input, according to the company. That means it can be a monitor, but it also can facilitate livestreaming and offer a high data rate 4K input without resorting to an external capture converter – something a phone’s standard USB-C connection simply can’t do – in addition to handling all the regular duties that come with being a smartphone.

Let’s take a second to talk about the specs of the phone. First off, it supports 4G/LTE and 5G, and at launch is available through Verizon or as an unlocked phone for use with other carriers. Aside from its 6.5 inch 21:9 CinemaWide 4K HDR AMOLED screen, the camera has three cameras, 16mm, 24mm and a 70mm equivalent. It also has a IP65/68 water and dust resistance, plus 512GB of internal storage that’s expandable up to 1TB with a microSDXC card.

The phone is powered by the Snapdragon 865 5G mobile platform and has select USB-C tethering, depending on if the camera used supports it.

Why should you buy it?

The convenience of having your monitor already on your phone is huge for the everyday videographer. When you add in that the Xperia Pro allows you to quickly transfer stills from it or go live, the Xperia Pro  really shows its value. The data transfer is fantastic for photographers that need to take an image, then quickly send it away to be published. It does this very well when used for photo transfer, offering an efficient workflow that makes the time between image capturing and publishing so much faster.

Next, the Xperia Pro possesses the ability to use it as a livestreaming hub. It utilizes the HDMI connection between it and your camera to tether to the phone’s 5G data connection in order to facilitate a high-speed livestream. Speaking of the Xperia Pro’s 5G capabilities, it offers the benefit of 5G mmWave (a rarity among smartphones), as well a unique 360-degree antenna design that pairs with the phone’s beamforming technology. Because of that, an on-location livestream is no issue as long as you have cell service.

If you can deal with the expense, it’s a great way to improve a livestream’s production since it gives you the benefit of employing an interchangeable lens camera. It’s also a smartphone, of course, meaning it has three built-in cameras that can do the job when the real deal isn’t available. Like prior Xperia cameras, the camera can capture with Sony Venice color science if you desire and record 10-bit video.

Why shouldn’t you buy it?

How you would use the Xperia Pro should dictate whether or not it’s right for you. If you need a great smartphone but not necessarily a capable monitor, this is not the phone for you. If you want to livestream with an external camera, but don’t need a monitor or phone, this phone is not for you. To justify the large $2,500 price tag, the user needs to take advantage of every single aspect of the phone.

As a monitor, it’s novel. As a videographer, having it constantly with you is convenient, with a few notable exceptions. Here is a situation that could be problematic: you’re in the middle of shooting when someone calls you, causing an unfortunate interruption in the shooting process when you answer the phone.

A simple solution to this issue seems like it could be to put the phone on airplane mode. No data, no interruptions, right?

So, you put the phone on airplane mode to rid yourself of  interruptions, right? Not so fast. Airplane mode negates the 5G connection that’s one of the highlights of the device. Plus, it’s worth considering how someone would be able to reach you in the event of an actual emergency if the Xperia Pro is relegated to airplane mode.

To be fair, this is an issue that pops up no matter how you use a phone during production, so take it with a grain of salt. Shooters have oftentimes run into this issue when flying a drone, since most of today’s modern drones allow smartphones to serve as monitors.

If the smartphone doubled as an external recording device with capabilities that mirrored a product like the Atomos Ninja V 5”, Sony wouldn’t be able to keep them in stock. Is it doable to put that kind of technology in such a small form factor? Maybe, but maybe not. Either way, it’s still fun to think about, and even wish for in Sony’s next iteration of this high-end smartphone. Many times. even being able to capture proxies with it for lightweight files for dailies would be beneficial.

The image made with the Xperia Pro

We put the cameras inside the Xperia Pro to the test to tell you what you can expect for dynamic range, its low light performance and if it has rolling shutter. Starting off with dynamic range, using our DSC Labs Xyla 21 dynamic range chart, we saw seven stops of dynamic range. This isn’t what you’d find in any of Sony’s mirrorless cameras, but it’s not bad for a smartphone camera.

Next, we found its low light performance to be as expected for a device of its size. Small sensor cameras are not known for having exceptional low light performance. To test it, we did an ISO ramp from its lowest to highest ISO to see when noise enters the picture and at what point is the noise so significant that the image is unstable. As a rule, we would always shoot below ISO400 with the camera. Above ISO400 the noise begins to get larger and colorshift.

A quality smartphone at a premium price

The Xperia Pro is packed full of great technology. It is solidly built and allows for livestreaming using its HDMI port, something no other smartphone on the market today can claim to achieve. In addition to all of that, you can pull it right out of your pocket and insert it into your shooting setup as a monitor thanks to its HDMI input. It’s an amazing tool and will work great for some, specifically those who are active in the field of photography and videography.

However at $2,500, it’s certainly not for everyone. If you can take advantage of its unique, high-end features, then its price is justified. If not, maybe consider the Sony Xperia 1 or Xperia 5, or whatever version Sony has made it up to by the time you read this review.