The Blackmagic URSA Mini Pro 12K has the longest name for a camera ever, however it’s fantastic. It’s $10,000… yeah, that takes the breath away. While you recover from the sticker shock, let us tell you that it has no resolution competition, not even at double the cost. We really liked this camera. Its image looks great, it has all the functions you need, but 12K… do you need 12K?

Let’s face it, the 12K video is awesome. Even if you don’t need all of the resolutions, it functions in many different ways. When you downscale the image, it looks even sharper, any noise minimizes. 12K is 4 times larger than 4K, which means you can do a 4x punch-in when finishing in 4K. That’s enough to give you a medium-wide shot, medium shot and close up all in one.

A drawback to the innovation from this camera is it only captures in Blackmagic BRAW for all resolutions and framerates. However, because of this, the files are 12K in 12-bit RAW. With the release of Davinci Resolve 17 and Blackmagic RAW viewer, we opened and manipulated the footage in Premiere as well. We wanted to see a lower bit-depth option in the form of ProRes or H.264. As nice as it is to have all the data when you have the time to grade the footage, it’s not always needed. This would also give a working proxy for those that need to edit dailies without adding the time to grade.

The camera also shoots to SD, CFast 2.0 or to SSD. When it comes to SSD, it works with an external USB drive or the Blackmagic URSA Mini Recorder. Also, the Mini Recorder connects via USB. The Mini Recorder lets you use 2.5″ SSD cards. This — by the way — is the most cost-effective and best-performing option at $400. Additionally, not all media captures high bit-rate and or framerate. Because media proves costly when shooting at high data rates — like what’s possible with the URSA Mini Pro 12K — make sure you have the right media. Blackmagic has a list of supported media for the camera.

The body of the URSA Mini Pro 12K is no larger in dimensions than the URSA Mini Pro 4.6k G2 or the one before that. It is, however, slightly heavier at 5.62lbs. That is nothing compared to the original URSA at a whopping 16lbs, but it’s heavier than most. It’s not too awkward when adorned with the optional shoulder kit and EVF, but it gets the job done.

The camera has all of the controls you want right at your fingertips. From audio control to ISO, Shutter speed and white balance. This is no different than the URSA Mini Pro G2 that came before it. It’s nice having all of the key controls ready when you need them instead of digging into a menu to find them. The switches, knobs and dials feel hefty and function well. We found the ND control to be the most used and functions as you’d expect.

The articulation of the screen is limited — the monitor is not fully articulating. It has no less or more articulation than the previous URSA Mini. With that said, however, we wish it rotated to flip the monitor for the subject to see themselves, or to be tucked back to its resting place but with the monitor facing outward. Like the rest of the camera, the monitor is stout and has a very satisfying click when closing.

Because this camera shoots HDR, its monitor is 1000nit bright for real HDR preview. 1000nit is the entry brightness for HDR. When shooting with the sun at our back the brightness helped. If it wasn’t that bright, the limited articulation of the monitor leaves you wanting. When that is the issue, use an external monitor.

Blackmagic offers the best menu function of all cameras. It has the same format as every other Blackmagic camera. It’s easy to use. It’s not complex, yet still has all the controls needed. All of the functions are touch-activated. The organization of the menu is intuitive. One of the best features is the heads up display overlay options. If you want peeking on, it’s on one page with all of the other shoot assists.

There is no shortage of shoot assists with the URSA Mini Pro 12K. More than just the assists you need, you can route them to the monitor, EVF or out the SDI, be it the one in the rear or front of the camera. Want clean output to the rear 12-G SDI but need guides or something else in the front SDI port? It’s no problem, easy to do and not hard to find on the menu. Of course, the camera offers focus peaking, zebras, audio meters and histogram. On top of that, it also has false color, a safe area grid or just a grid for composition.

The image from this camera is breathtaking. More than just resolution, it produces a fantastic image. Its Super 35 image sensor is nearly 80 megapixels (MP), which is insane. The amount of detail in a 4K finish is significant. Because 12K is 4 times the resolution of 4K, if the final product is 4K, any noise reduces in size by 4 times. This benefits when shooting chroma keying or anything else where the additional detail would benefit.

The crop factor of a super 35 image sensor is 1.5x, double that to 3x for super 16. That means that in super 16, the image sensor area used is smaller than micro four thirds. Because the sensor is so high resolution, this isn’t much of a big deal, outside of needing to consider it for lens selection. For example, a 3x crop to a 50mm makes it an effective 150mm.

The camera only shoots in Blackmagic RAW. This allows for 12-bit RAW and it’s quite efficient. Although still a staggering amount of data, when shooting at the highest data rate the camera shoots 578 megabytes per second (MB/s). The camera captures either a constant bitrate or constant quality. The camera captures in 5:1, 8:1, 12:1 and 18:1 Blackmagic RAW with constant bitrate. This gives each ratio more or less compression. The other type of BRAW compression is Constant Quality. It offers a variable bitrate with minimum to moderate quantization to make sure the quality is constant, hence the name.

There are three gamma choices to choose from, just like Blackmagic cameras in the past, it has Film, Extended Video and Video. Film offers the most dynamic range giving the most work needed to the image in post-production. Extended Video gets closer to being ready right out of the camera, but keeps some of the benefits from the Film curve. Lastly, Video is ready right out of the camera and will allow for only minor corrections needed during post.

The camera‘s ISO range is not great at ISO 200 to ISO 3200. Although this is nothing when pitting it against the rest of the camera world, it’s more than some other Blackmagic cameras. ISO 200, 400 and 800 are noise-free, we would not hesitate to bounce between the three. Blackmagic lists 800 as the native ISO for this camera. By ISO 1600 noise enters the image, but not enough that we wouldn’t use ISO 1600. However, it is enough that we wouldn’t shoot any higher than 800 with 1600 there for edge cases. Although the camera offers ISO 3200 we would not use it. The noise chroma shifts at this point and the image are significantly impacted by it.

The camera has a rolling shutter, so it has some adverse effects. The big question is, how adverse is this effect? The rolling shutter is not the worst we have seen, but you see it in horizontal lines when panning the camera or when filming a fast-moving object.

As of right now, the URSA Mini Pro 12K currently has no rivals. 12K is only available with this camera. With that said, there are other Cinema cameras that one might consider either for similar features or nearly as high resolution. We compared the similarities and differences between this camera and the Canon EOS R5, Z CAM E2-F8 Full-Frame 8K Cinema Camera, RED KOMODO and the Sony FX9.

The first camera we considered is the furthest from the URSA Mini Pro 12K, the Canon EOS R5. at $3,900 it’s much less money, however is not a cinema camera. What it does have going for it is high resolution. Its 45MP Full-frame sensor can capture up to 8K RAW.

Secondly, we have the Z CAM E2-F8 Full-Frame 8K Cinema Camera. The E2-F8 is a full-frame camera that captures 8K 12-bit ZRAW internally to Cfast 2.0 media. Though the design of the E2-F8 is for cinema, it’s a modular camera. With a modular camera, you add on what you need for your specific need. So there are no built-in ND, the buttons and form factor make it awkward at best without some serious investment in rigging. The E2-F8 also offers external capture out of its USB port.

The RED DIGITAL CINEMA KOMODO 6K is up next. With a price of $6K, the Komodo is a fraction of the price of the rest of RED’s cameras. At half the resolution of the URSA Mini Pro 12K, the Komodo is like the E2-F8 and is modular. As to a modular design, you need additional investment to get the camera fully functional and with proper rigging. The Komodo has a super35 image sensor and offers RedCode RAW (R3D), the pinnacle of RAW available. With R3D ISO and white balance are just metadata that change without any degradation of the image. The Komodo also offers a global shutter and more advertised stops of dynamic range.

Lastly, we have the camera that offers the best comparison in function, the Sony FX9. It has all of the exterior controls and inputs to be ready to shoot out of the box, just like the URSA Mini Pro 12K. The Sony doesn’t capture internal RAW at all, but outputs it up to 16-bit, only in 4K. There is no way to capture that yet with what is in the external recorders market.

In conclusion, Blackmagic created a truly innovative camera, as its almost 80MP sensor captures the image to the Blackmagic RAW captures. The camera offers all of the bells and whistles you need on a camera. The image is stunning and its media offerings are plentiful. Was the world clambering for a 12K camera from Blackmagic? Maybe? Maybe not. However, if high-resolution video is what you need, then it’s your only option — but it’s a good one at that. The camera should be considered a specialty cinema camera, but Blackmagic didn’t disappoint. With a solid build, innovative capture and specs, the Blackmagic URSA Mini Pro 12K is a beast. 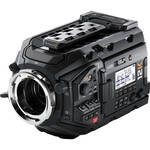