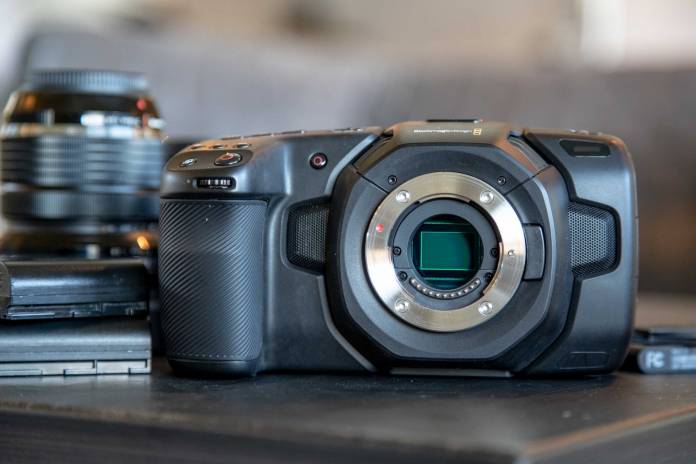 The Blackmagic Pocket Cinema Camera 4K is a fantastic camera. It shoots beautiful DCI 4K RAW video, has an easy to use menu and costs only $1,300.

With the Pocket Cinema Camera 4K, you can record in either CinemaDNG RAW or ProRes to SD, Cfast 2.0 or external media. The camera offers dual native ISO for less noise at higher ISOs, and it can capture up to 120 frames per second in windowed HD mode.

(Update: Between our testing and the publication of this article, Blackmagic Design released a firmware update that replaced CinemaDNG RAW with Blackmagic RAW.)

The Pocket Cinema Camera 4K is the second camera in the Pocket Cinema line. The original Pocket Cinema Camera shoots resolutions up to HD in RAW or ProRes and did actually fit in some larger pockets, though not with a lens attached. This new camera, on the other hand, wouldn’t fit in a giant’s pocket. It’s a big, clunky camera.The Pocket Cinema Camera 4K has a 5-inch touchscreen and the industry-leading menu and operating system, the Blackmagic OS. Its form-factor is that of a mirrorless hybrid video/photo camera, but, ironically, it doesn’t shoot photos. The first reaction from this reviewer is that it’s just plain ugly. Luckily, the picture quality is much prettier than the physical design.

The long list of amazing features on this camera is matched with a list of flaws that is just as mind-blowing, from the poor design of the battery door — which could leave the battery on the floor — to the port covers that are a fight to replace once uncovered. Add in its abysmal battery life, and you have a camera that’s more difficult to operate that you would expect.

The Pocket Cinema Camera 4K‘s biggest flaw, however, is its inability to actually capture the top resolution and frame rate of DCI 4K at 60fps in CinemaDNG RAW, which Blackmagic Design touts at the top of the camera’s spec sheet. There is no media currently available that can keep up with the data rate. Despite this, you can still select the record mode — it just won’t work. The fact that it can even be selected is a significant oversight from Blackmagic Design. It begs the question: If the camera can’t capture it, why is it offered in the first place? Is this a case of future-proofing or padding the spec sheet?

Another thing to note is that the camera will try to capture to any media you put in it. Using slower-than-recommended media can lead to dropped frames, but on the other hand, older and more affordable media can be used at settings with lower data rates.

If you plan to shoot in RAW, the data rate can be up to 272 megabytes per second. That’s some serious data creation, working out to over 16 gigabytes per minute. At that data rate, a 64GB card will capture just 4 minutes of video. Looking at the list of supported media, 4 minutes of capture will cost a minimum of $120 for an SDXC card or $155 for a Cfast 2.0 card. A 512 GB Cfast 2.0 card will set you back at least $530 and will get you a little over 31 minutes of record time in RAW.

The lowest cost per gig is a larger capacity SSD. For about $150, you can get an SSD that will capture for 15 minutes at the highest data rate. Outside of having to secure the media, external SSDs are a great lower cost option. All you do is plug them in via USB 3.1 and you are ready to format and shoot; it’s really easy.

Regardless, if you need to shoot for hours in 4K RAW, expect to shell out more for media than you did for the camera.That’s where having ProRes is handy. You will get double the capacity of your media just switching to ProRes 422 HQ. That also opens up the options for recording media.

We mentioned before the battery door has been known to fail. It’s not likely you will see this happen to a brand new camera, but we suspect the door won’t hold up to normal wear and tear. Lens Rentals saw the problem quickly as their gear gets an unusual amount of hard use. We did not experience this problem during normal shooting, but we were able to get the door to open on its own by shaking the camera a bit. But hey, what can you expect for $1,300?

Speaking of the battery, it’s a very common Canon EP-L6. We noticed during testing that the battery percentage went down very rapidly. Our suspicions were confirmed when we tested the battery life. Across a few different batteries and tests, we saw a relatively consistent battery life of about 40 minutes. The camera did get hot during our tests but never hot enough to affect performance.

In use, a 40-minute battery life means that, on top of needing to swap out the media often, you’ll also need to replace the battery quite frequently.

Our last major frustration with the Pocket Cinema Camera 4K is its port covers. Three hunks of rubber cover the mic input, headphone output, HDMI out, 12v power, USB-C port and mini XLR port. Once you pull them out, the covers are difficult to put back. In fact, we were unable to get the top cover back in place unless we started at the top and worked our way down. We ended up leaving the covers open while testing. This is another one of those “What do you expect for $1,300” features.

Digging into the details

The PCC4K’s Micro Four Thirds sensor offers a 1.9 times crop factor. The smaller sensor makes this camera affordable. If you want a larger sensor, this isn’t the camera for you. With the right lenses, however, there isn’t much lost from the sensor size. Consider this: MFT lenses will set you back about half of what you would pay for a similar full frame lens.

Moving on, the camera has a deep grip, but the form factor wants to be used with two hands at all times. If it had in body image stabilization, the camera could be used handheld, but because it’s $1300, this is not a feature we would expect.

The camera’s also missing continuous autofocus, offering only single point AF. You can use the monitor to set your focus, but it won’t move off that point unless you focus it on something else. Depending on the conditions, it can focus quickly, but we saw some hunting while shooting a dark subject on a dark background.

But the monitor is good for more than just touch focus. It’s also how you can interface with the camera. The menu is operated by touch, although there are buttons for the things you use the most often, like ISO and shutter speed.

The 5-inch touchscreen has a great viewing angle, and that’s a good thing because the monitor does not move. It has no articulation at all. Because the screen is larger, no movement isn’t as bad as it could be, but it’s still lame when you want to shoot low or high angles or in situations where there is loads of glare on the screen. But, what do you expect for $1,300? The screen looks great and, along with the built-in shot assists tools, it gets the job done.

Next, we put the Pocket Cinema Camera 4K through some basic tests to see its low light performance, moiré and rolling shutter.

The Pocket Cinema Camera 4K has a dual native ISO, meaning there are two ISOs where noise is at its minimum. For the Pocket Cinema 4K, you have a native ISO of 400 and 3200. The sensor utilizes the native 400 ISO setting up to 1,000 ISO. At 1,250 ISO, the camera jumps to the low noise range of the native 3,200 ISO setting. It doesn’t eliminate noise at higher ISOs, but it does buy another stop or two of usable ISO before noise is an issue in the image. We saw noise start at ISO 400 and was acceptable all the way up to ISO 6400. After that, the noise starts to dramatically affect the sharpness of the image.

To test the moiré of the camera, we shot the DSC Labs SineZone test chart. The Pocket Cinema Camera 4K had no moiré issues at all. Even when panning and tilting, fine lines looked normal.

Moving on to testing rolling shutter, we panned the Pocket Cinema Camera 4K back and forth to see if vertical lines started to bend. The camera does have a rolling shutter, so we expected to see a bit of jello, but there wasn’t much of any. This makes the camera a good candidate for active shooting.

The image quality of the Pocket Cinema Camera 4K is equal to or better than the other cameras in its price range. In fact, you won’t find RAW in any other camera even close to $1,300. With that said, we wanted to test out the camera’s higher frame rates to see if the image quality suffered. While the sensor is cropped even more when shooting 120 fps in HD, it’s very sharp and the image quality is fantastic.

With its price and feature list, the Blackmagic Pocket Cinema Camera 4K is unrivaled. However, that doesn’t mean everyone should buy one. Its many flaws leave plenty of room for competition. To makes things more fair, we only compared cameras capable of producing 10-bit video. The first camera is the Panasonic GH5 for $2000. It has a Micro Four Thrids MOS sensor and can capture internal 4:2:2 10-Bit 4K video at 30 fps. The GH5 has a fully articulating touchscreen, but it measures in at only 3.2 inches. It also features in-body image stabilization, an OLED viewfinder and V-Log L.

Next up is the full frame Nikon Z6 for $2000. Although it can’t capture 10-bit internally, it can output it to an external recorder. Adding a recorder would increase the cost of the camera by about $1000. The Z6 also has log shooting, an EVF and a tilting touchscreen LCD, along with IBIS.

Lastly is the Canon EOS R at $2,300. It also requires an external recorder to capture 10-bit video. It has a fully articulating touchscreen and EVF. Lastly, it has C-Log capture and the industry-leading dual pixel AF.

Something else to consider as you shop: Blackmagic Design includes DaVinci Resolve Studio with every camera they sell. This robust post-production software now integrates Fairlight for audio editing and Fusion for visual effects and motion graphics, in addition to Resolve’s editing and color grading tools. Buying DaVinci Resolve 15 Studio on its own will set you back $300, so it’s a nice added value for the Pocket Cinema Camera 4K.

The Blackmagic Design Pocket Cinema Camera 4K gets it done for $1,300. It has a long list of flaws, but with a price tag like that, they might not outpace its value. We liked the camera, but issues like battery life, poor external design and expensive media cause us to hesitate in giving a whole-hearted recommendation. In the end, what do you expect for $1,300? 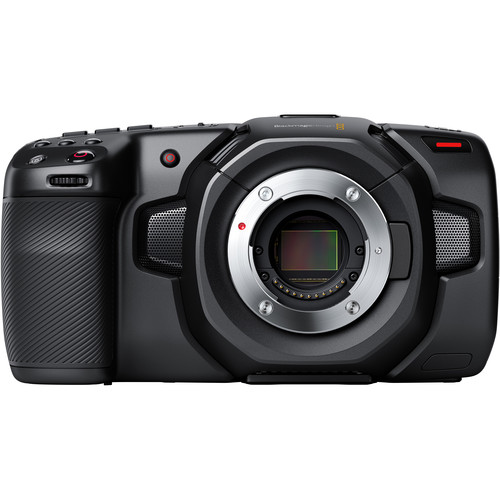