If you are not considering Sigma when buying a new lens, you’re making a big mistake. Their Art series lenses are synonymous with exceptional build and image quality. The 14-24mm f/2.8 DG HSM Art is exactly what you would expect — a solid lens at an affordable price. The lens looks as good in use as it does on paper, but it isn’t without some flaws.

The lens is available in either Canon EF mount or Nikon F mount and covers a full frame sensor. Sigma says that it has virtually zero distortion at infinity focus and while this is mostly true, the word “virtually” is key.  It’s super close, but we did experience some very slight barrel distortion from the lens. Barrel distortion is when vertical or horizontal lines look like convex curves. Think of how a barrel bulges out; that kind of bend is what you experience with barrel distortion. Although slight, we did see a bit of this kind of distortion at the edges of the image with the lens at 14mm.

This 14-24mm f/2.8 DG HSM Art is fully weather sealed and has a 9-blade iris. Expect beautiful round bokeh from the 9 blades. Lenses with fewer blades will have bokeh that’s less circular and smooth. The lens lacks stabilization, but this isn’t likely to be needed anyway because of how wide the lens is. Lastly, for those who want shallow depth of field, this is achieved most easily with a close focus. With a 10.9 inch minimum focus distance, you can focus on a subject nearly on top of the lens. Shoot at 14mm and you can shoot a 6 foot tall person from head to toe at just 11 inches from their face.

We tested the lens on a multitude of cameras along with comparing it to other similar lenses. We shot the lens on a Sony a7 III with a Sigma MC-11 adapter, a Canon 1DX Mark II and a Blackmagic Design URSA Mini 4K. We also compared it to the Sony FE 16-35mm f/2.8 GM and Canon EF 16-35mm f/2.8L III USM. Because the review unit we had was EF mount, we compared images shot with the Sigma paired with the Canon 1DX Mark II against the same images shot with the Nikon D850 using Nikon AF-S NIKKOR 14-24mm f/2.8G ED for our tests.

Every lens we compared it to cost a minimum of $600 more than the Sigma, and in the case of the Sony, $900 more. Just keeping up with those lenses would make it a great value, and it did just that. In fact, it’s sharper from the center all the way to the edges. But, it’s also significantly heavier than all of them — though this is a result of the larger elements used to optimize performance.

The build quality of this lens is top-notch. It feels great in the hands. The focus and zoom rings are tight and responsive. It only has one switch to engage or disengage autofocus. That switch is not easy to accidentally click and is very positive when it is switched. The amount of rotation in the focus is nice for video shooters. Shooting video on photo lenses means no hard stops on the focus ring, but because of the added degrees of focus control, it’s not hard to dial in perfect focus.

The build quality of the this lens is top-notch. It feels great in the hands.

If you want any kind of lens flare, good luck! The lens is engineered to not have lens flares, so if you want any imperfection in your image, it’s going to be hard to achieve. Whether that’s good or bad obviously depends on if you like lens flares or not.

There are some more obvious downsides, however. For video shooters to take advantage of f/2.8, they need to be able to control the amount of light when shooting outdoors or when light is in abundance. This is where neutral density (ND) filters are your friends. Put some sunglasses on your lens and the light is controlled. However, this lens has no filter threads, so you will need to use filters in a matte box. If not already available, the added cost should be considered.

We also noticed some vignetting when at f/2.8 at 14mm, however only when shooting stills. When shooting video using our camera’s cropped sensor, the edges of the sensor that see the vignetting are not part of the viewable image. Additionally the lens has some focus breathing when zoomed into 24mm or when wide at 14mm. Focus breathing is when the field of view changes when the focus is adjusted from infinity to minimum focusing distance — not great for video work.

Every Sigma Art lens we have used has been excellent. Sigma has made it hard to choose other lenses through the value they offer and the high standard of build quality. It’s a heavy lens, offers minor distortion and has focus breathing, but it’s a great deal when compared to the competition. This lens is loaded with value.

The Sigma 14-24mm f/2.8 DG HSM Art is a great looking and nicely built lens. Don’t look past Sigma during your next lens search. 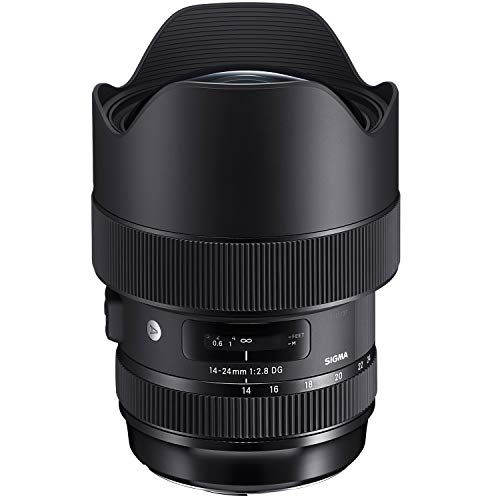 Chris Monlux is proud of his 5-year-old son Lucas, who just read for the first time. He is also Videomaker’s Multimedia Editor.