Directed at converting DSLR users to the mirrorless form factor, the Fujifilm X-H1 delivers a heftier feel at a good price point. This new X Series mirrorless camera offers an appealing feature set for those used to the strengths of a DSLR, with its 3.69 million dot electronic viewfinder (EVF) and the optional boost grip. Add in internal sensor stabilization and you have a great rival to the feel of a DSLR.

With a 24.3MP APS-C CMOS sensor and 5-axis in-body image stabilization, the X-H1 can capture up to DCI 4K at 24 frames per second (fps) internally, or UHD 4K at up to 29.97 fps. Plus, it shoots up to 120 fps in HD. The X-H1 sees the inclusion of F-log as well as Film Simulations for those looking for more than just standard picture profiles. The fully weather sealed body has dual UHS-II SD card slots and a 3-inch, 3-way tiltable LCD touchscreen.

We got the opportunity to review the X-H1 with a pair of the new Fujinon MKX cinema zooms. These lenses are not cheap, costing $4,000 for the MKX18-55mmT2.9 and $4,300 for the FujinonMKX50-135mmT2.9. Because of the APS-C sensor, the X-H1 has a 1.5 times focal length multiplier, or crop factor, compared to a full frame sensor. That makes the 35mm equivalent of these lenses 27-82.5mm and 82.5-202.5mm. However, that’s only when shooting in HD. When shooting in 4K, the crop factor goes up to 1.75 times. To say these lenses are overkill for this camera is an understatement. These fully manual cine lenses perform beautifully with a wonderful picture, but they are far from ideal for pairing with the X-H1 because of their cost. Their size also makes them a bit unwieldy in some shooting situations.

Without the boost grip, the X-H1 already feels a bit better than your typical mirrorless camera. The camera is not very heavy — its within an ounce of the Sony a7 III and Panasonic GH5s. In addition to increasing the size of the camera, the boost grip we used with this review also increases the maximum clip length and the number of still frames you can capture per second. The grip takes the camera’s record limit from 10 to 30 minutes. We don’t understand why the record limit is so short without the grip — it’s a bummer for sure. When shooting stills, the maximum frame rate goes from 8 still frames per second to 11 with the grip.

On top of increasing record time, the grip also extends the battery life of the camera by three fold. The boost grip can also double as a charger for two batteries. When connected, the power status of all three batteries is displayed in the top display. Additionally, the camera doesn’t have a headphone jack unless you add on the boost grip. Overall, the boost grip is well worth the additional $300.

Those used to the quality of optical viewfinders in DSLRs will find the high dot count EVF on the X-H1 to be more than adequate. Video shooters, however, will more commonly use the rear LCD. First off, it is tiltable, so there is a bit of movement for getting a better viewing angle. The screen also tilts for shooting in portrait mode, but this isn’t as beneficial to video shooters, unless you shoot vertical video. It is a pretty clever system, but it seems more complicated than just including a fully articulating screen. And if you need to view yourself for a vlog or selfie, you’re out of luck here. The screen, however, is touch controlled, and if you want to do a touch rack focus from one subject to another, it works pretty well. However, the overall reaction time from touch control is a bit sluggish. The joystick is much easier to use for navigation and has immediate response.

The top display is really nice. It offers two different viewing modes with black over white or white over black. Our favorite part of the top display is that it changes its layout when switching between photo and video modes. Us video shooters now have a custom menu that we can look at.

The external knobs for shutter speed and ISO control are nice for a quick change. For ISO control especially, it’s super handy. See what you want, turn the knob and you’re ready to go. We didn’t find ourselves using the shutter control much while shooting, so that control knob might not be as useful as the one for ISO.

The X-H1 has a strange shutter button. It feels spongy — there isn’t a positive feeling when pressing it down. It’s not a big deal for video shooters, but will take some getting used to for stills. The image will be captured at a somewhat surprising timing — where the command is given within the sponge is not quickly identified. It will take some muscle memory to get it down.

Two big built-in features for video shooters are F-log and Film Simulation. There are quite a few different Film Simulations, but one stands out: Eterna. Fujifilm describes Eterna as “soft color and rich shadow tone suitable for film look movies,” and it’s actually based on their previous movie negative film stocks. Eterna is a good choice for someone who doesn’t have time to grade their footage. For those who do have time to grade, F-log is the right fit. Log recording uses a logarithmic function curve to preserve a higher quantity of dynamic range and tonality from the image sensor, giving you lots of flexibility in post-production. For those who want it both ways, Fujifilm offers an Eterna LUT that you can use in combination with F-log.

When the camera and lenses first arrived, we noticed a few big problems. The most notable one is that we could not capture any video. The shutter button would not trigger video capture. Additionally, the image stabilization was also not working. After a quick conversation with Fujifilm, we verified that the camera was missing the most recent firmware, and without it, the camera was incompatible with the lenses. Once we did the update, everything worked fine.

Before we got that answer though, we tested capturing to an external device. Recording ProRes 4444 out the HDMI to an Atomos Shogun Inferno, we got to experience the lenses without the sensor stabilization. It wasn’t a huge problem when wide, but once we zoomed in, we couldn’t keep the image still.

Once the camera was functioning properly, the difference was immediately noticeable. We read a few reviews that said they had reservations on the function of the stabilization. Prior to the update, the in-body image stabilization (IBIS) wasn’t up to the task of smoothing out handheld footage. We’re glad they improved it; we experienced quality IBIS comparable to that found in cameras like the Sony a7 III and the Panasonic GH5. The IBIS will even work with lenses that have optical stabilization, yielding control of any axis that is better handled by the lens.

The really cool part of the high speed mode is that it converts the footage to a standard frame rate so you can have slow motion playback.

The X-H1 will even capture up to 120 fps in HD in its high speed recording mode. The really cool part of the high speed mode is that it converts the footage to a standard frame rate so you can have slow motion playback. However, we did find that there was some sharpness loss in the footage in this mode. You also can’t capture audio with your slow-mo footage unless you shoot outside of the high speed mode, where you can capture up to 60 fps in HD.

To test the low light performance of the camera we started at the lowest ISO and doubled until we reached the highest setting. To counter the increase in exposure, we increased the shutter speed at the same time. We did three separate tests: one with the standard Film Simulation, the second with Eterna and the last in F-log. Both standard and Eterna had the same performance with noise starting at ISO 1600 and usable noise levels up to ISO 6400. In F-log, noise comes in at ISO 6400 and anything over that is outside of professional quality. With a noise floor of ISO 1600 and a top of 6400, this camera is on par with the Sony a7 III and the Sony a7R III.

The X-H1 is at the top of its category with a price tag of $1,900. Looking at other cameras with the same size sensor and the ability to shoot 4K, its closest competitor is its little brother the X-T2 at $1,600. The X-T2 lacks sensor stabilization, and its EVF has a million fewer dots. And you won’t find Eterna Film Simulation on the X-T2 either. It does, however, shoot F-log and the Eterna LUT can be obtained for free from Fujifilm.

The next up is the Nikon D7500 for $1,250. It shoots 4K and is a DSLR for those who want a mirror. Because of that mirror, it doesn’t offer IBIS. Nikon didn’t have a log picture profile when designing this camera, so that’s out as well. The big benefit of Nikon is the huge selection of F-mount lenses.

Last up is the most comparable camera: the Sony a6500 for $1,200. Along with its APS-C sized sensor and internal 4K capture, it also has 5-axis IBIS. Additionally, it includes Sony’s log picture profile, S-Log. Just like with the X-H1, the a6500 is missing a headphone jack. The biggest difference between the two cameras is their size and bit-rate options. The a6500 is a smaller camera, weighing in at almost half a pound lighter than the X-H1, and it can only shoot at 100 Mbps.

The picture quality of the X-H1 is very nice. We love the inclusion of Film Simulations and F-log. We aren’t a big fan of the shutter button and wish the camera had a fully articulating rear monitor. Its price is on the high side, but with the boost grip, the camera becomes much more functional for video shooters. The stills from the camera look good as well, making it a great fit for the hybrid shooter.

The Fujifilm H-X1 is a APS-C mirrorless camera that can capture up to DCI 4K. With built in log recording and a high dot count EVF, the H-X1 has a nice feature set for video shooters. 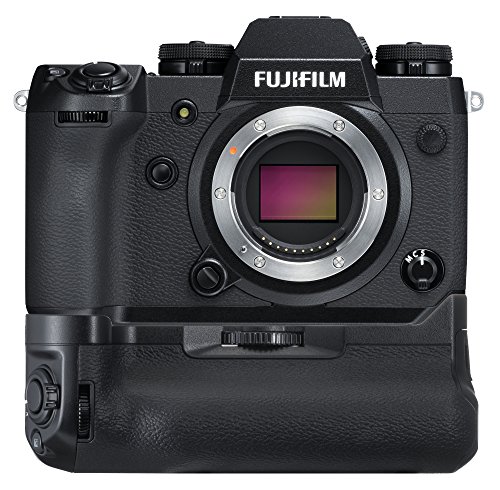 Video Clip Length: Up to 30 Minutes

Chris Monlux is very found of coffee at 3:30PM. He is also Videomaker’s Multimedia Editor.