The Promise Atlas S8+ is a solution for those who have multiple systems and need to access the same data at the same time. Similarly, for those who want a Thunderbolt 3 connection, there aren’t many options for you.

Consequently, how does the Atlas 8+ stack up? Read speeds are fast with a constant average of 1,250 megabytes per second (MB/s). However, write speeds are a bit more complicated. More on that later.

The S8+ can be configured with up to 112 terabytes (TB) of storage with support for the newest 12 and 14 TB drives.

Most noteworthy, this NAS is also virtualization-ready with products like VMWare, Citrix and Hyper-V, and it has cloud-enhanced encryption. Promise proclaims that you get enterprise features and service, but doesn’t go so far as to say it features enterprise-class components.

We first saw the S8+ at NAB 2018, giving it our best NAS of NAB 2018. When it arrived, we quickly opened it up started plugging it in. Because it comes with drives, it’s ready to set up out of the box.

The unit came with a few instructions stapled together, telling us to turn off packet signing for SMB2 and SMB3 connections. Hence, we followed the directions for MacOS, since we tested the NAS with an Apple iMac Pro and MacBook Pro with Touch Bar.

Above all, this is a more technical process and if you are not up to the IT task, you may need to find help like I did. It requires the use of the terminal and some code. After our in-house IT professional helped get SMB packet signing turned off on the iMac Pro, we started testing. Seems like this is an advanced set-up, far from a plug and play system. However, after this, the process became much more simple. The MacBook Pro didn’t require this step, so some might not have to go to such lengths.

To finish up the initial setup, first we used the web browser interface to access the system, which was connected via T3. It prompted us for a username and password. Once logged in, we found the NAS in our network and were able to send and receive data from it. Second, to test the read and write speed, we went through this process several times to set the Atlas S8+ up for different RAID configurations.

The Atlas S8+ isn’t meant to be a small piece of hardware that is plug and play ready for any type of use. It needs to be configured for how you want to use it. With any NAS, configurations should be a one-time thing: Get it working for your needs and then don’t mess with it.

Consequently, some will be adventurous enough to set this NAS up on their own; many more will need help getting it set up the best way possible. We had to check in with our IT manager multiple times during this review to validate settings.

We hinted at complicated write speeds earlier, now let’s talk about them a bit. During the process of testing, we discovered after hours of troubleshooting that our antivirus software was choking the write speeds of the S8+ by a factor of three.

Instead of seeing the up to 1,200 MB/s write speeds we later verified, we saw a max of 375 MB/s. Promise was very helpful when trying to troubleshoot our problem, even sending another unit out overnight. Certainly, if they offer the off-the-street consumer the same service as we received, you’ll be in good hands. They were very responsive and worked tirelessly until they were able to identify the problem. They also informed us that our problem is now documented for better troubleshooting for other users.

The issue is that the antivirus software wants to be in control of the data and therefore tries to control the flow of data to the device, meaning the problem is not specific to the Atlas S8+. Once we removed the software, we saw write speeds up to 1200MB/s and read speeds up to 1250 MB/s. The one problem is that if you need write speeds, you can’t have an antivirus on. That might be a non-starter for some.

This is the second brand to bring a Thunderbolt 3 NAS to market. QNAP has two similar offerings, but the TVS-1282T3 is a better direct comparison to the S8+.  Similarly, the QNAP system doesn’t come with drives and costs between $3,100 and $3,500 depending on how much RAM you want.

Include enough drives for 32TB and you’re looking at an additional cost of nearly $1,120 dollars (based on the current price of Toshiba N300 4TB NAS drives). That would make it a few hundred dollars more than the S8+. The last major difference between these two products is the CPU. The QNAP has an Intel i7 whereas the Promise has an i5.

If you need a NAS that comes configured with drives and can allow for multiple users to access and write data via Thunderbolt 3, the Promise Atlas S8+ is a good choice. Finally, it comes equipped with all the drives you need, so there is only the one cost to consider. It performed well, though we wish that it didn’t need an advanced understanding of IT to get it to perform to its greatest potential on some systems. 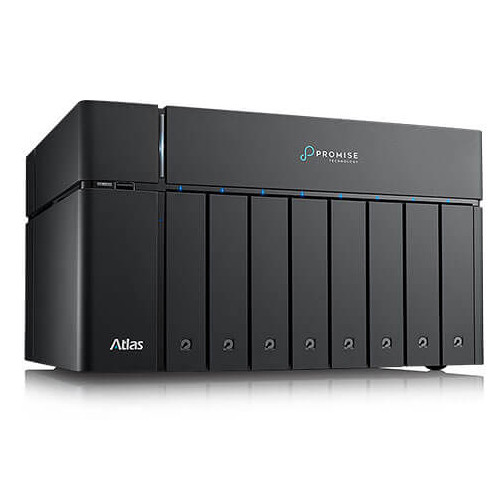