Let’s take a look at the top features of the Sony ZV-E10:

Being that it houses an APS-C Exmor CMOS sensor with a BIONZ X imaging processing engine, the Sony ZV-E10 looks to deliver higher quality than most vlogging cameras on the market. Many vloggers settle for smartphone cameras but, by comparison, the ZV-E10’s sensor is about 10 times larger than a smartphone, allowing it to capture much more detail and produce a higher quality image. Additionally, it supports more cinematic depth-of-field control and HDR along with lower noise levels.

The Sony ZV-E10 oversamples 6K to produce 4K video at 30p. Oversampled 4K video from 6K video retains more detail than 4K video shot standardly, so the image quality should be more detailed than the standard 4K camera. It also features a few functions like HLG (Hybrid Log Gamma) and S-Gamut3.Cine/S-Log3, S-Gamut3/S-Log3. The camera also has an interchangeable lens mount, which is unique compared to similar vlogging cameras. So, you’ll be able to swap out lenses depending on the situation and your desired look.

Flexible autofocus on the ZV-E10

The ZV-E10 camera supports both phase-detection and contrast-detection autofocus, allowing the camera to be helpful in various situations. Phase-detection is ideal for keeping fast-moving subjects in focus, whereas contrast-detection is best when you want more accurate autofocus in live-view. It’s slower than phase detection, but it’s much more accurate. So, the ZV-E10 is ready to capture both fast-moving subjects as well as still life, landscapes and portraits. You can also fine-tune their settings to your liking.

Additionally, the ZV-E10 features real-time Eye AF for humans and real-time tracking. So, when you’re behind the camera, Sony claims the camera will keep you in focus as you move around the frame.

Sony designed the ZV-E10 camera with a few vlogging-specific features. For instance, the camera has a vari-angle LCD screen, allowing you to see the camera’s framing while being in front of the camera. Weight-wise, the camera is just 12 oz (0.75 pounds) and measures out to be 4.53 x 2.52 x 1.76. It seems to be a highly portable camera that shouldn’t present a problem to carry around with you.

You can turn the ZV-E10 camera into a webcam through USB. It supports the UVC/UAC standards and sends image and audio outputs to PC or smartphones. There’s no need for a video capture card and you don’t need any special software or app. Overall, its livestreaming seems simple to set up and it will likely save you some money thanks to not needing a capture card.

Lots of options for audio

Capturing clear, quality audio when you’re out vlogging or livestreaming is very important. The Sony ZV-E10’s audio functions, on paper, seem to have the goods to help creators deliver professional audio. It features a Multi Interface (MI) shoe. Also, it supports low-noise digital sound recording and operation without connecting cables or a power supply. You can connect the latest wireless microphone and lavalier microphone through the MI short connection. 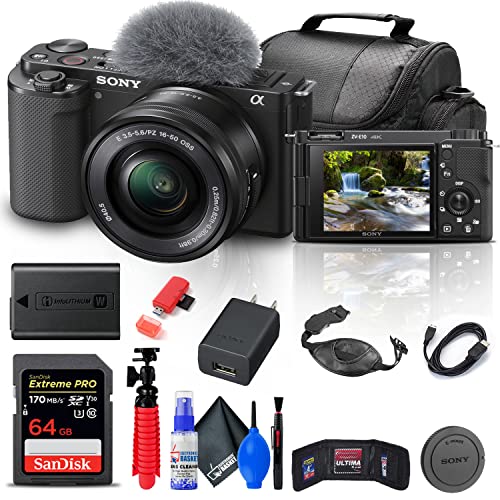