Sony announced its latest upgrade to its Sony a7R full-frame mirrorless camera. The a7R V comes three years after the release of the a7R IV.

The Sony a7R V has a 35mm full-frame back-illuminated Exmor R CMOS image sensor with approximately 61.0 effective megapixels. This is the same sensor as the Sony a7 R IV. However, the new camera has the latest BIONZ XR image processing engine. This processor is used in the Sony a1 camera and has up to eight times the processing power of the a7R IV.

The Sony a7R V can record high-quality 8K (7680 x 4320) high-resolution video in 24p or 25p. The camera uses the XAVC HS format with HEVC/H.265 compression. In addition, you can select full frame and Super 35mm sensor formats for 4K movie recording up to 60p or 50p. You can also use full pixel readout in the Super 35mm mode without the need for pixel binning. This makes 2.6x oversampling possible for 4K movies. When shooting in 4K, the XAVC S-I (All-Intra) or the XAVC HS formats are supported, with 10-bit 4:2:2 color sampling.

The Sony a7R V can record video in S-Cinetone. S-Cinetone is based on the technology of Sony’s CineAlta Cameras, such as the Venice cinema camera. It delivers images with natural mid-tones, soft colors, and great highlights. You can also choose to shoot in S-Log3, which can achieve more than 14 stops of dynamic range.

Sony cameras are renowned for great autofocus and the a7R V is no exception. The camera has an AI processing unit specifically dedicated to subject recognition. It can also use human pose estimation to precisely recognize not just eyes but body and head position. In addition, for video shooters, real-time autofocus tracking has been improved. This means that the Sony a7R V will automatically track specified subjects with precise focus, including focus on the subject’s eyes.

The Sony a7R V has an updated high-precision advanced 5-axis in-body optical image stabilization system. This has advanced gyro sensors and optimized image stabilization algorithms for stills and video. Sony says that it will give you up to 8 stops of stabilization in the body alone. The camera also has Active Mode stabilization, which provides stronger stabilization for handheld video shooting. However, there is a slight image crop with Active Mode. In addition, Active Mode is not available when recording XAVC HS 8K or using a frame rate of 120 / 100 fps.

This camera uses Clear Image Zoom to compensate for focus breathing. Focus breathing is the change in image size or angle of view that can happen when adjusting focus. The camera also records focus breathing metadata that can be used in post-production.

The a7R V has Sony’s newly developed 4-axis multi-angle LCD monitor. This combines the utility of a conventional tilting monitor with side-opening vari-angle flexibility. The screen has a 3:2 aspect ratio, with 2.1 million dots, touch operation and a wide color gamut (DCI-P3 equivalent). In addition, there is a 9.44 million-dot OLED electronic viewfinder. The a7R V has two media slots that support both CFexpress Type A and SDXC/SDHC memory cards.

Overall, the Sony a7R V looks to be a mixed bag for filmmakers. Some video shooters will be tempted by its headline 8K resolution. However, the camera costs around the same as the more video-focused a7 S3, which can record 4K at 120p, while the a7R V tops out at 60p. On the flip side, the a7 S3 only has a 12.1-megapixel sensor, so stills are much lower resolution than with the 61-megapixel a7R V. Sony’s new camera has a lot of features to get excited about, and it’s certainly one to consider if you are looking to get a new camera.

The Sony A7R V full-frame mirrorless camera is available to pre-order now. It costs $3,899 and is scheduled to be available around December 6th or 7th. 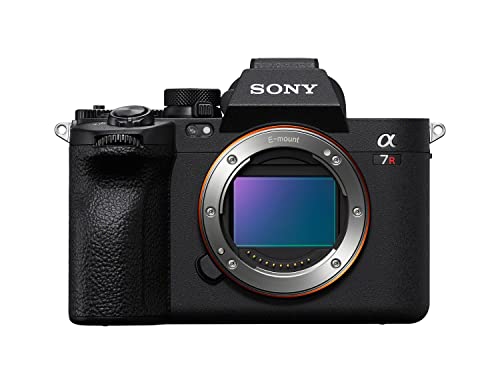