Sennheiser newly announced MKE 400 shotgun microphone is a highly portable mic. Vloggers, videographers, and mobile journalists looking to capture audio on the go on their dedicated cameras or mobile devices will find this microphone useful.

“Much has been said about the importance of good audio for video,” says Kai Lange, Senior Product Manager at Sennheiser. “Now, the new MKE 400 lets users experience how vastly it improves in-camera audio, lifting storytelling to the next level and wowing audiences”

After today’s release, Sennheiser is replacing the prior MKE 400 model with this model. Though the model is popular, Sennheiser is confident “die-hard fans will agree that the latest version surpasses the original in many ways.”

This microphone lends itself well to interviews, inside or outside. The mic uses an acoustic interface tube, allowing it to only pick up sounds facing it, canceling out noise from the side. So, you can interview someone and eliminate the background noise.

The mic features a shock-resistant capsule to reduce noise. While it protects the microphone from shock, it also works as a windscreen. Its low-cut filter removes low frequencies as well. This includes ambient sounds like wind rumble and air-conditioning hum.

Most video professional recordings using various devices. The mic comes with 3.5 mm TRS and TRRS locking cables, allowing you to use the mic on DSLR/M cameras and mobile devices. Additionally, the mic’s cold-shoe mount, with ¼-30 thread, lets you mount to a variety of devices.

According to Sennheiser, the microphone lasts up to 100 hours of continuous audio capture. It takes two AAA batteries. 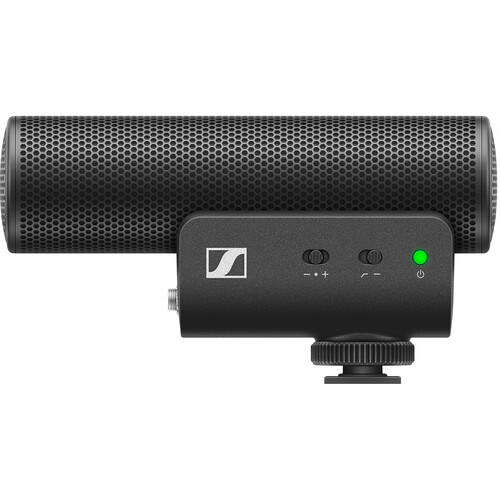