All of the lenses in the range are the same size and the controls are in the same place. This makes it much easier when you are swapping between them in use. Panasonic also designed the lenses to have similar centers of gravity, which is a great advantage for gimbal users. In addition, the lenses all share the same filter size of 67 mm.

The Panasonic LUMIX S 35mm has eleven lens elements in nine groups. These elements include three aspherical lenses and three extra-low dispersion lenses to limit chromatic aberration. The lens also has a minimum focusing distance of under ten inches for great close-ups.

Panasonic has also included a mechanism to reduce focus breathing, which is great for videographers. In addition, you can adjust the 9-blade circular aperture in microsteps. This means you can change the exposure smoothly while shooting video.

The Panasonic LUMIX S 35mm is a lightweight lens, weighing under 10½ ounces. It also has a dust and splash-resistant design.

As well as announcing the Panasonic LUMIX S 35mm, Panasonic also revealed they are working on a new 18 mm ultra-wide-angle fixed focal length lens with a fast f/1.8 aperture.

The Panasonic LUMIX S 35mm F1.8 will be retail for $699. It will be available at the end of November. 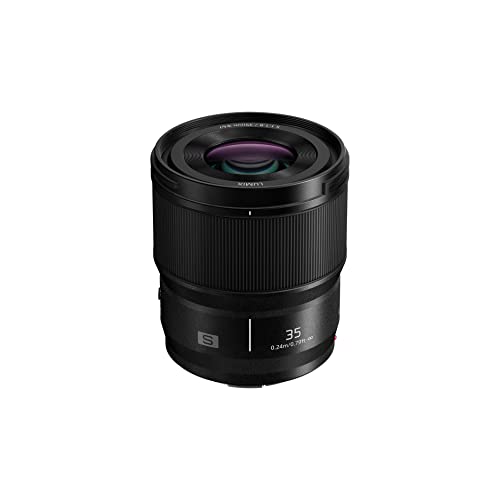