Big news coming from Panasonic: the company announced the new mirrorless LUMIX BGH1 camera. This new camera is based on the Micro Four Thirds System standard and looks to be highly portable.

The LUMIX BGH1 takes advantage of the Panasonic interchangeable lens lineup and offers high expandability, allowing multi-camera control. Additionally, it can be used in a variety of scenarios, such as drone shooting, IP remote control and even livestreaming.

The LUMIX BGH1 houses a 10.2-megapixel Live MOS Sensor with Dual Native ISO technology and the Venus Engine. Essentially, its Dual Native ISO bridges two circuits of separate native ISO and minimizes noise generation by choosing an optimal circuit to use according to the sensitivity before gain processing. In total, the ISO system allows for a maximum ISO 51, 200 high sensitivity recording.

The LUMIX BGH1’s autofocus system can detect subjects like humans and fast-moving animals, such as dogs, cats and birds. For humans, in addition to tracking the eye, face, and body, the head is separately recognized by real-time detection tech.

According to Panasonic, the LUMIX BGH1 is a compact, light-weight box-style camera. It’s body is built from aluminum and magnesium alloy. So, the overall build should be durable and light. Also, Its heat dispersion structure allows the camera to achieve unlimited video recording.

The Panasonic LUMIX BGH1 releases this December for $1999. 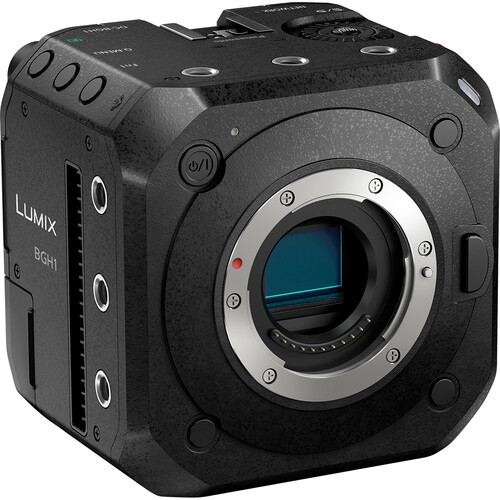