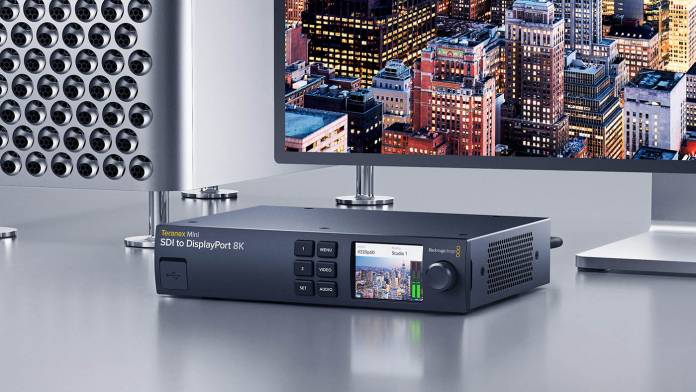 Described by Blackmagic, the $1,295 Teranex Mini SDI to DisplayPort 8K HDR is an “advanced 8K monitoring solution for Pro Display XDR and other DisplayPort computer displays or high quality monitors.” This solution seems like it would fit right in any film studio or broadcaster’s workflow. It would be for pros who want more professional color monitoring, but don’t want to spend a fortune. You even get two on-screen scopes that can be selected between WFM, Parade, Vector and Histogram.

The Teranex Mini front panel of the device includes controls and a color display for monitoring the video input, audio meters and video standard indication. Additionally, the panel can be used to control display settings. So, you can do things like switch reference modes and adjust brightness. From the front panel, the 3D LUTs can be enabled just by pressing the buttons labeled 1 or 2. The audio meters can be switched between VU or PPM ballistics. Also, there are settings for configuring scopes and their on-screen location or opacity. You can even view and edit network settings.

As for the rear panel, it has Quad Link 12G-SDI for HD, Ultra HD as well as up to 8K formats. There is also a USB‑C style connection for monitors such as the Pro Display XDR, and two full-size DisplayPort connections for regular computer monitors. Additionally, there’s a built-in scaler that should make sure the video input standard is scaled to the native resolutions of the connected DisplayPort monitor.

All you need to do is connect a Pro Display XDR or an HDR-compatible DisplayPort monitor to allow HDR SDI monitoring. Static metadata PQ formats in the VPID are handled according to the ST2108-1, ST2084 and ST425 standards. ST425 defines two new bits in the VPID to indicate transfer characteristics of SDR or PQ. ST2108-1 defines how to transport HDR static or dynamic metadata over SDI.