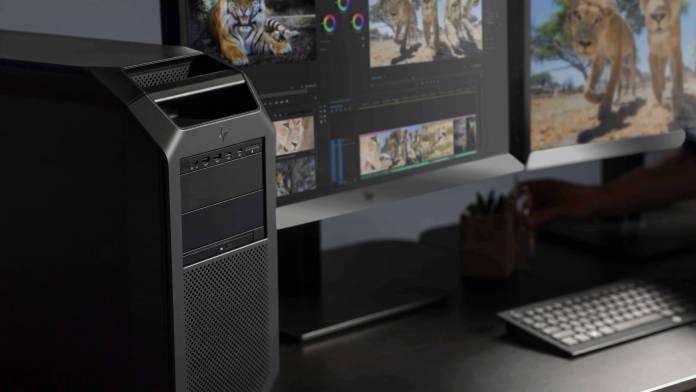 Today, HP announced two new power PCs. The Z6 G4 and Z8 G4 both pack a powerful punch with up to 56 processing cores and support for 8K video workflows.

With both Intel Xeon Scalable processors and Intel Optane DC Persistent Memory technology, HP says the HP Z6 and Z8 G4 “eliminate the barrier between memory and storage” for those with taxing workflows. Intel improved system performance by moving large datasets closer to the CPU. This essentially allows for no data loss after a power cycle or application closure, according to HP.

“We’ve seen great success in our high-end performance category with each of our workstation generations consistently introducing new ways to create and be more productive,” said Xavier Garcia, vice president and general manager, Z by HP, HP Inc. “Today we are pushing the boundaries even further with the launch of Z6 and Z8 G4, the world’s first workstations demonstrating the power of Intel Xeon and Intel Optane DC, that offer accelerated performance with premium processor architecture, so our customers can create, iterate and implement faster than ever before.”

So, now let’s talk about both computers:

Described as “a sleek powerhouse” the Z6 G4 should be able to handle the demands of 8K video in real-time as well as rendering. Sporting two next-gen Intel Xeon processors, it supports up to 56 processor cores. That’s just in one PC! Plus, it supports NVIDIA and AMD graphics and up to 384 GB of memory.

Also, for all you tinkerers out there, the PC is upgradeable, so you can keep adding to the computer as the time goes on.

HP makes the huge claim the Z8 G4 is “the most powerful workstation on the planet.” Like the Z6, the Z8 has up to 56 processing cores. This paired with up to 3TB of memory allows the Z8 G4 to support complex 3D simulations and VFX workflows as as machine learning algorithms.