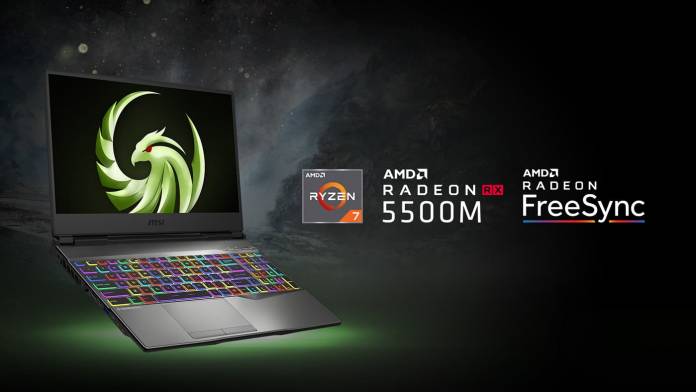 What does the Radeon RX 5500M gaming graphics card really do for the laptop? According to MSI, the card will deliver triple-digit framerates and “enhanced” 1080p visuals. In addition to the RX 5500M graphics card, the laptop features a 15.6-inch 144Hz FreeSync panel. At the same time, it cost under $1000.

How does the Alpha 15 perform?

The Alpha 15 is said to be 30 percent faster than the GTX 1650 and lives up to the performance metric of “60 fps in AAA titles and 90 FPS in eSports games.” The AAA titles MSI is referring too include Borderlands 3, The Division 2, Civ 6, World War Z, Monster Hunter: World and Battlefield 5.

To keep things from overheating at max power, MSI has included AMD’s SmartShift technology. It should cool the CPU and GPU based on what you’re doing in order to achieve peak performance and the best battery life.

For its audio, the Alpha 15’s Dynaudio Giant Speaker has a chamber that is five times bigger than other gaming laptops. The speaker system takes up almost a quarter of the chassis. “The speaker system pumps out impressive surround sound at higher volumes and with better clarity without sacrificing bass,” says MSI.

Additionally, the Alpha 15, according to MSI, has high-resolution audio for those who wear headphones.

The Alpha 15 will be available before the end of the year. The laptop will come in two models, as a 16GB RAM version and an 8GB RAM version. They will cost $1,099 and $999 respectively.