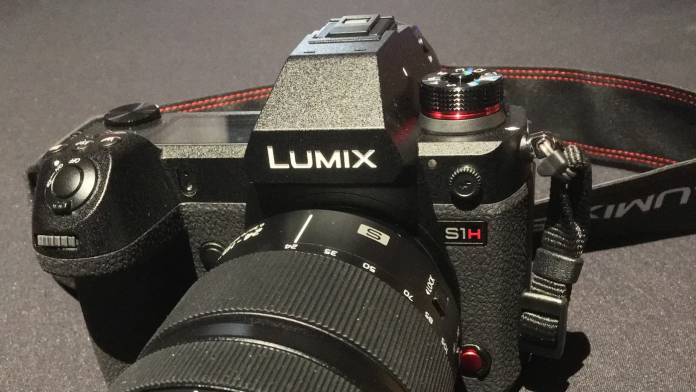 When most people hear the word “Hollywood”, they think of movies and celebrities. But today at the Dolby Theatre, located in Hollywood, there’s a different kind of star making its first appearance. Panasonic is officially launching their LUMIX S1H to the world: a full-frame mirrorless camera with cinema-quality video. The camera promises rich gradation and a wide color space that is virtually equal to that found in cinema cameras.

The S1H is all-in on video and may in some ways skew to video shooting over photography. It is a hybrid camera, but that doesn’t seem to undermine its cinematic features. For instance, it’s the world’s first full-frame ILC to offer 6K/24p recording in a 3:2 ratio. And in another world-first, this full-frame interchangeable lens system digital camera features 10-bit 60p 4K/C4K video recording. This 6K mirrorless camera is now the company’s third full-frame mirrorless camera. While a hybrid camera, it’s primarily a video camera.

Here are some of the S1H’s most important specs

For the journalists and pundits from near and far, all eyes are on the presentation stage in anticipation and expectation of what this camera can do.

Matt Frazer, Business Development Manager for LUMIX, takes the stage. But instead of focusing on the camera’s impressive list of features — more than 14 stops of dynamic range, unlimited recording time in all recording modes via Panasonic’s unique heat dispersion technologies, the ability to shoot images in 14-bit RAW format — he instead calls up several creators who’ve had the chance to test out the S1H prior to release.

They each expound on how the camera has enabled greater creativity in their filmmaking efforts. Among those called are Carissa Dorson, Cinematographer, who relates using the S1H to shoot her latest dance film. Also on stage is David C. Smith, Cinematographer, Cinema Technologist and CEO and Creator of DrivingPlates.com LLC. He comments on how well the camera functions in an environment where moving vehicles predominate.

The story behind the camera

But for a deeper understanding of what Panasonic hopes for in this camera, we turn to Yosuke Yamane, Director, Imaging Business Unit, Panasonic Corporation, Japan:

“The S1H is Panasonic Lumix’s our first full-frame camera that is designed specifically for the filmmaker in mind,” he says. “The newly developed 24.2-megapixel full-frame image sensor complies with the new Dual Native ISO. In combination with the optimum signal processing by Venus Engine, it achieves high sensitivity and minimum noise. The LUMIX S1H provides 14+ stops of dynamic range, which is as wide as those of cinema cameras, and V-Log / V-Gamut compatible with popular colorimetry called ‘VariCam Look’.”

Yamane notes that they talked to cinematographers and crews who were using the GH5 series as well as VariCam and EVA1 and gathered comments and visited their shooting locations worldwide to investigate what kind of camera and video shooting style they were looking for.  “We developed the S1H to include customer needs and the virtues of a single lens/LUMIX system, and created a camera that we trust will offer new value. We believe that S1H became a camera that creates new value by combining these video production needs with the value of LUMIX and mirrorless.”

Shooting with the S1H

After the presentation, it’s time to let the attendees handle the S1H for themselves. Relocating all to the Goya Studios a few blocks away, everyone is now given a camera to use while at Goya — not to keep, unfortunately. To provide interest, Panasonic has set up a table where a chef is building gorgeous cakes. To the side is a restaurant table populated by a couple who have the good fortune of eating said cakes. And at the other end of the studio, two fencers prepare to do battle as a smoke machine wafts in a fog.

All of this creates visuals that employ the creativity of those shooting as well as the technical abilities of the S1H to capture these scenes.

This much anticipated announcement confirms what many have been hoping for in the S1H. With 6K/24p, 5.9K/30p, 4K/60p 4:2:2 10-bit internal recording, we’re excited to see what this camera can create. One of the major words to describe the camera’s recording formats, frame rates, resolutions is “versatile.” There are many opens that can be customized to meet your needs.

First introduced in the Panasonic’s VariCam line, the Lumix S1H sports the company’s Dual Native ISO tech. Essentially, this means the camera can switch between native ISO settings of 640 and 4000 and not end up raising noise levels.

Other features we should mention

As for durability, the S1H is weather sealed, meaning it is dust-resistant, splash-resistant, and freeze resistant to -10°C.

What about photo shooting?

The S1H is a hybrid mirrorless camera, so we should talk about its photo specs also. It can capture 14-bit RAW stills at up to 6fps with continuous AF or 9fps with AF locked. Additionally, the camera sports Eye Autofocus and Advanced AI Technology. They help the Contrast AF-only focus system lock onto and track subjects.

There is a 6K photo mode that can shoot up to 30fps. Lastly, a high-resolution photo mode can use the camera’s IBIS to create 96MP stills with multiple images.

The Panasonic Lumix S1H will be out this September for $4,000. You can read more into the S1H on Panasonic’s website and preorder it now.