Lexar has launched the new Lexar Professional 1800x SDXC UHS-II Card GOLD Series of memory cards. The company says that the cards are for professional photographers and videographers using DSLRs or mirrorless cameras.

Lexar’s Professional 1800x SDXC UHS-II memory cards have the latest UHS-II technology and a Video Speed Class 60 (V60) rating. In addition, they are also backward compatible with UHS-I devices, performing up to the maximum thresholds of UHS-I speed capabilities.

These memory cards have read speeds of up to 270 MB/s. This means you will be able to download your photos and videos quickly to speed up your post-production workflow. The cards also offer write speeds of up to 180 MB/s which Lexar states will be suitable for recording Full HD and 4K video.

The Lexar Professional 1800x SDXC UHS-II memory cards have also been built to withstand the stresses and strains of professional use. Lexar states that the cards are waterproof, temperature-proof, shockproof, vibration-proof and X-ray-proof.

“We are excited to announce the Lexar Professional 1800x SDXC UHS-II Card GOLD Series. These cards offer high-speed performance and will dramatically accelerate digital photography workﬂow from shooting in the field to post-production,” said Joel Boquiren, General Manager of Lexar. 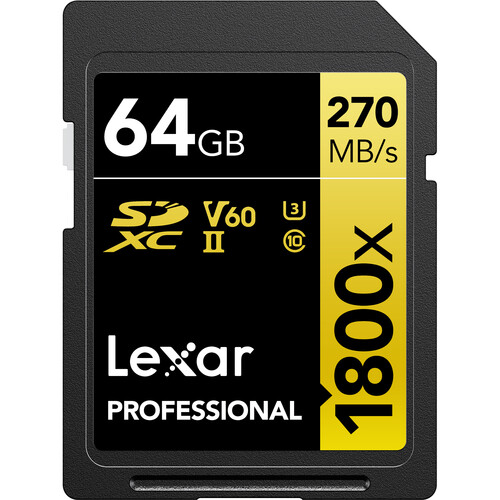