You can use the iRig Pro Quattro I/O as a mobile or field recording interface. You can connect it to desktop computers, laptops and mobile devices and capture high-quality, multi-channel audio up to 24-bit/96 kHz. The iRig Pro Quattro I/O also has a complete MIDI I/O for keys, drum machines, controllers and more. In addition, it is MFi-certified to provide seamless performance with iPhones and iPads.

You can use the iRig Pro Quattro I/O as a podcast or streaming interface. In Stereo mode, you are able to mix sources to stereo for streaming or recording. You can also use Mono mode for streaming to all popular social media platforms. In addition, the Loopback feature lets you duet your favorite videos easily and Loopback+ lets you mix in audio or route from app to app.

When you use IK Multimedia’s iRig Pro Quattro I/O as a broadcasting or video interface, it turns your iOS or Android device into a fully-featured field recorder. This means you don’t need an SD card; you just use your mobile device or computer to record files. The iRig Pro Quattro I/O even has an onboard MEMS microphone that’s DSP-controlled for optimal sound.

The iRig Pro Quattro I/O also works great as a standalone preamp and mixer with +48V phantom power for up to 4 condenser mics.  In total it has four XLR/1/4″ for mic, guitar, and line in with phantom power. It also has two RCA 3.5 mm line in. There are two balanced XLR outs and a headphone out with direct monitoring. You can use the full set of inputs/outputs to capture and mix multiple sources. You can then send the mix to your DSLR camera or a PA system for live performances.

The IK Multimedia iRig Pro Quattro I/O measures 6.54-inches by 3.62-inches by 1.69-inches and weighs only 0.72 pounds without batteries. For ease of use, it mounts to a standard UNC 1/4-inch camera thread. It can be powered by 4 x AA batteries, USB or DC using the optional PSU. 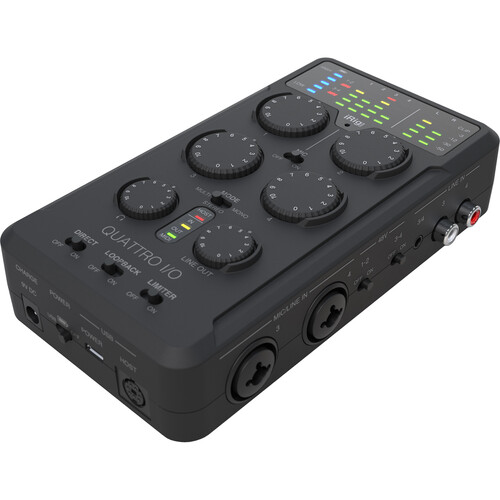 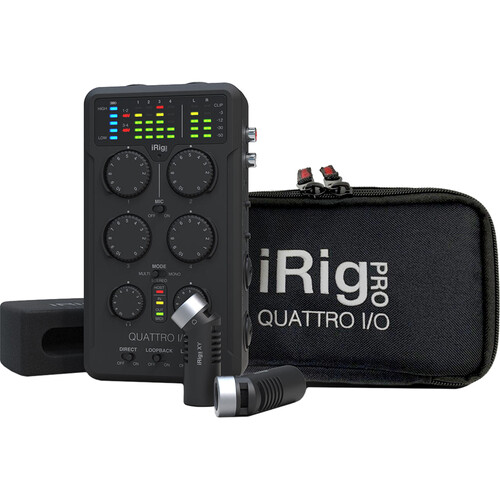