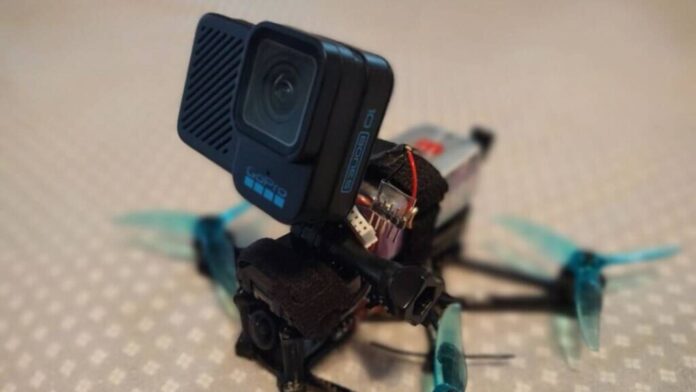 GoPro has announced the lightest GoPro even, the GoPro HERO10 Black Bones. According to GoPro, it built the camera to be the ultimate first-person view (FPV) drone camera.

“Since the dawn of FPV, pilots have been adapting GoPro’s versatile HERO cameras to capture incredibly immersive perspectives in flight – going as far as sawing them apart to engineer a better solution to address their needs,” said Pablo Lema, GoPro VP of Product. “With HERO10 Black Bones, the FPV community now has the lightest GoPro ever – an easy to set up, no-compromise, custom-designed camera for the FPV use-case. We’re excited to see how far the community can push the limits of FPV content creation with HERO10 Black Bones.”

The HERO10 Black Bones weighs under two ounces and has a lightweight, ventilated body. The camera has a replaceable lens cover in case of a crash. You can also swap this lens cover for third-party HERO10 Black and HERO9 Black ND filters.

You can control the cameravia two physical buttons on the camera. You can also use the Quik App, GoPro Labs QR Codes, GoPro’s The Remote or a drone’s transmitter. In addition, the camera can be powered with your existing drone batteries if they are within specification (2S-6S, 5-27V).

With the GoPro HERO10 Black Bones, you also get a license for GoPro’s Emmy award-winning ReelSteady video stabilization. This is now part of the new GoPro Player + ReelSteady desktop application. GoPro claims, with this software, you can create the “smoothest, silkiest FPV footage ever.” You also get access to premium tools like Lens Correction and Batch Export within the new app.

The GoPro HERO10 Black Bones is available now in the United States at GoPro.com. It costs $399 with an included year GoPro Subscription or $499 without a subscription. A license for ReelSteady, which comes with new camera, is also available separately for $99.