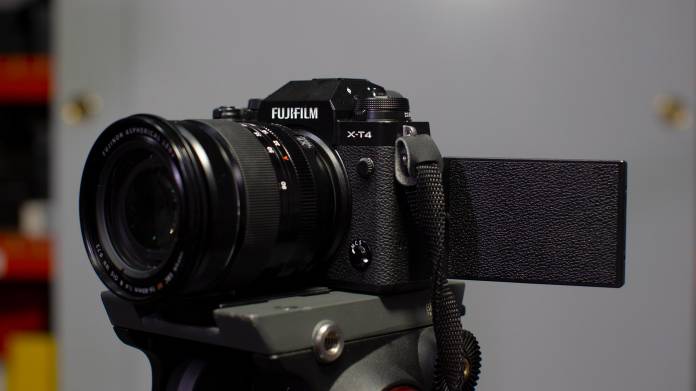 Update: The Fujifilm X-T4 is a recipient of our Editors’ Choice award, which recognizes exceptional video production equipment, software and services. Click here to see all of the current Editors’ Choice winners in the DSLR/mirrorless camera category.

Congratulations to Fujifilm! The Fujifilm X-T4, a strong entry in the X Series family of mirrorless digital cameras, is Videomaker’s pick as the best hybrid camera of NAB Week 2020

The X-T4 comes with a lot of important features. According to Fujifilm, the camera has a newly designed IBIS, a quiet shutter, a new vari-angle LCD screen, and an Eterna Bleach Bypass Film Simulation. Additionally, it has a battery that lasts quite a while and a form factor that’s both compact and lightweight. The camera records DCI 4K/60p and Full HD/240p super slow-motion video. It can also record F-Log footage in 10-bit color. These are some of the reasons why it’s the best hybrid camera of NAB Week 2020.

“This camera is the perfect tool for today’s image makers and is an ideal multi-functional solution for visual storytellers to use in creating their stories,” says Fujifilm.

Inside, the X-T4 has a CMOS 4 sensor and an X-Processor 4 is paired with a 26.1 MP, back-side illuminated sensor. That sensor comes with a quad-core CPU that can produce wide dynamic range and impressive image quality, according to Fujifilm. Furthermore, the X-T4 “lightening-fast” processing and “precision” autofocus performance “right down to -6EV.”

How well does the X-T4 shoot video?

Moving onto the X-T4’s video shooting capabilities, the camera can record DCI 4K/60p and Full HD/240p super slow-motion video. It can also record F-Log footage in 10-bit color, straight to the card. Additionally, the AF-C subject tracking works in low-light conditions down to -6EV.

The X-T4 has five-axis In-Body Image Stabilization (IBIS) that offers up to 6.5 stops of image stabilization. Fujifilm promises of the camera that “even in the midst of all the excitement, images remain steady and sharp.”

What about the performance?

Fujifilm has made the X-T4 features a new mechanical shutter, which could be the fastest and most robust in the entire X Series. It can capture 26.1 Megapixel images at 15 frames per second and is rated for 300,000 actuations. Additionally, its battery capacity is capable of up to 600 frames per change.

With a 1.62 million pixel vari-angle touchscreen LCD that can be adjusted, the screen is visible from numerous different angles. Fujifilm says the screen has been designed to “easily” fold away, leaving the LCD screen completely hidden from view. Also featured is a 3.69 million pixel/100fps electronic viewfinder.