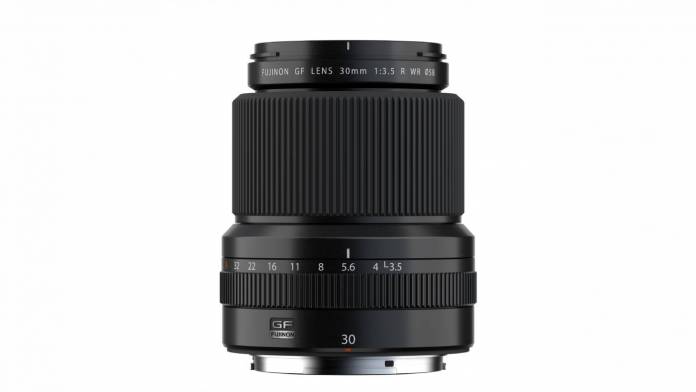 Let’s take a closer look at the newly announced lens and see what it has to offer:

The lens consists of thirteen lens elements in ten groups, including two aspherical elements and two extra-low dispersion (ED) elements. According to Fujifilm, the lens groups are positioned to control various aberrations. Additionally, the GF30mmF3.5 R WR should be able to “resolve an impressive amount of detail” being compatible with 100MP sensors, according to Fujifilm.

Since the GF30mmF3.5 R WR is a wide-angle lens that can be used for a variety of landscape shots, the lens needs to be portable and durable. Fujifilm stated the lens features a dust and weather-resistant design. It is sealed at nine locations and can be used at temperatures as low as 14°F (-10°C). In total, the lens weight 18 ounces (510g) and measures 3.9 inches (99.4mm) with a maximum diameter of 3.3 inches (84mm). Additionally, Fujifilm stated the lens features a slim design that should balance well on the GFX System camera.

Moving onto the performance of the lens, the GF30mmF3.5 R WR lens uses an internal focusing system. Focus breathing is said to be just 0.05% and it incorporates Fujifilm’s optical design and production technology processes.

The lens will be available in late July or early August in the U.S and Canada. The lens will be priced at $1699 in the US and $2299 in Canada. To learn more, check out the official Fujifilm website.