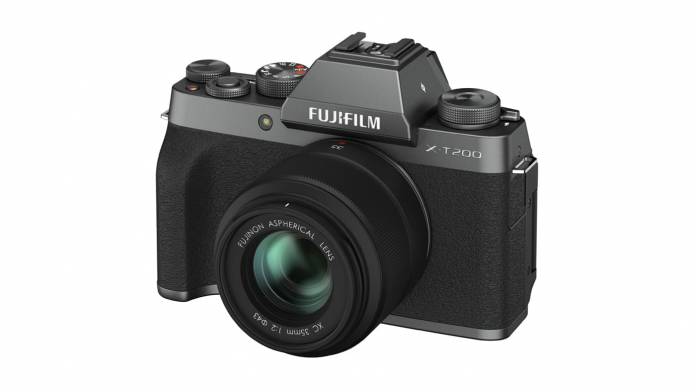 Today, FUJIFILM has announced a new mirrorless digital camera. That camera is the FUJIFILM X-T200, the successor to the X-T100.

The X-T200, a camera made for content creators of all levels, according to FUJIFILM, has a newly designed EVF. That comes along with a “quick” face detection AF and a new CMOS ASP-C sensor and processor. Together those can create 24.2MP stills at 8 fps and record 4K UHD video at 30 fps. Additionally, it features HDR usage for both video and still shooting and digital image stabilization. “An ideal camera for creative individuals who want to make high-quality imagery anywhere,” says FUJIFILM.

Weight-wise, the X-T200 weighs 370g. It is about 80g lighter than its predecessor: the X-T100. Also, it has a new vari-angle touch-screen. Its interface has also been designed to mimic what you would find in a smartphone. According to FUJIFILM, the camera can process data 3.5 times faster than the X-T100. The rolling shutter effect is additionally reduced and the AF performance is “dramatically” enhanced by using phase detection autofocus pixels across the sensor.

The X-T200 uses an LCD touchscreen

The X-T200 has a vari-angle 3.5-inch 16:9 Aspect Ratio widescreen LCD touch-screen. The screen itself can be opened and closed between 0 to 180 degrees and rotated between 90 to +180 degrees.

With a new AF algorithm and using on-sensor phase detection pixels across the sensor, the X-T200 should be able to focus quickly in a number of different conditions. Additionally, the camera has Face/Eye Detection AF, making it easier to focus on individuals and groups. Automatic functions include Main Subject Recognition as well. This feature allows users to set a main subject and the camera willtrack the subject through the frame.

Now, let’s talk about the camera’s video shooting. The X-T200 can shoot 4K video with electronic stabilization and in HDR. A gyro sensor guides the Electronic Stabilization mode and reduces camera shake when recording video.

The X-T200 camera body will be sold for $699. For more information about the camera, you can go to FUJIFILM’s official website.