The FUJINON XF 18-120mm lens covers focal lengths equivalent to 27mm – 183mm for a full-frame camera. Unlike most photo lenses, it has a power zoom. You can control zooming or focusing at a variable speed using the lens’s zoom/focus control ring. You can also use the zoom feature to drive the zoom at a constant pace.

Fujifilm’s FUJINON XF 18-120mm lens has 15 lens elements in 12 groups. These include three aspherical elements and three extra-low dispersion (ED) elements. Fujifilm states that this effectively suppresses spherical aberration, distortion and chromatic aberration. The company also says that the lens has minimal focus breathing. Focus breathing means that the image size slightly changes as you pull focus. In addition, the XF 18-120mm lens has a constant maximum aperture of f4.0 across the entire focal range.

The FUJINON XF 18-120mm lens uses an inner focus system, so the lens does not change length as you focus. The focus system drives a lightweight group of focusing elements with a linear motor and can achieve focus in as fast as 0.02 seconds. When used with the FUJIFILM X-H2S digital camera, the autofocus performance is even better, especially when tracking subjects while recording video.

The XF 18-120mm lens weighs just over one pound and measures approximately 4.9 inches in length. It has a filter thread diameter of 72 mm. In addition, the lens barrel is weather-sealed at 13 locations to ensure dust and weather-resistance

“This lens marks the first collaboration between FUJINON Optics and FUJIFILM X Series engineers, creating a truly hybrid solution for motion production professionals and enthusiasts alike,” said Victor Ha, Fujifilm’s vice president of its Electronic Imaging and Optical Devices Divisions. “Incorporating our inherent broadcast technology has allowed us to create a lens with both cinema and broadcast-style features that delivers smooth zoom, focus, and iris functionality.” 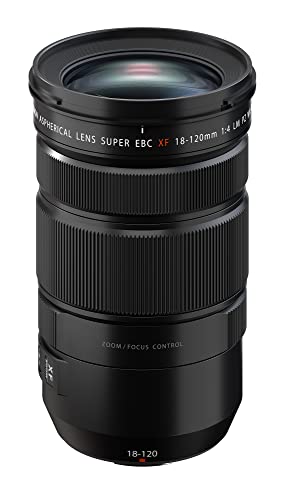