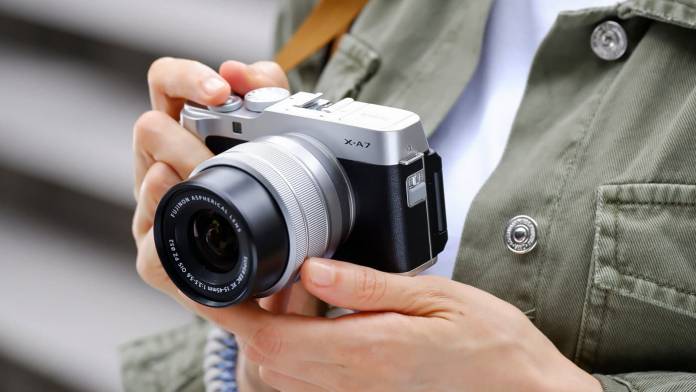 Fujifilm has just announced the launch of the X-A7 mirrorless digital camera. This camera promises a portable design and ideal shooting features.

The X-A7 sports a 24.3MP imaging sensor along with auto-focus, face detection and 4K video. Plus is capable of shooting stills at 6 frames per second. It seems this camera is shaping up to be an option for a wide variety of content creators with varying skill levels.

With its 24.2MP sensor, Fujifilm claims the sensor has 8.5 times more phase detection pixels across the surface than previous sensor models. Additionally, the X-A7’s readouts speeds allow for 4K video shooting at 30fps. At the same time, rolling shutter should be minimized.

There’s also a “Countdown Video” mode, which allows videos to be filmed at a pre-selected duration: 15, 30 or 60 seconds. Video can be shared on-the-go as well.

The X-A7 features enhanced face-detection and autofocus algorithms. Fujifilm says that the algorithms will work even in low-light and with moving subjects.

With the camera features a large 3.5 inch, 16:9 LCD touchscreen. The screen is vari-angle touchscreen allows the monitor to rotate in a number of various angles. There’s also a newly-designed “Smart Menu.” It should allow beginners to produce “high-quality images easily,” according to Fujifilm. In total, the X-A7 weighs one pound with the kit lens (XC15-45mmF3.5-5.6 OIS PZ) attached.

Fujifilm’s also included a new Bright Mode in the Advanced SR Auto function. This mode allows the camera to configure “ideal” settings to produce HDR and other options that create “bright, vivid images,” according to Fujifilm.