DJI’s Action 3 has a 1/1.7-inch sensor, and you can shoot up to 120 frames per second (fps) in 4K and 2.7K. If you drop the resolution to 1080p, you can double the maximum frame rate to 240fps. The camera also has a 155-degree super-wide field of view. This will help to make your videos immersive and dramatic. In addition, DJI says that the Action 3’s color temperature sensor intelligently adjusts white balance and exposure for highly accurate colors even in complex lighting environments.

The Action 3 has three electronic image stabilization options. RockSteady 3.0 eliminates camera shake in all directions and works up to 4K/120 fps. HorizonSteady gives you the same stabilization and keeps your horizon level at all times. In addition, HorizonBalancing is a mid-point between RockSteady and HorizonSteady. It corrects the tilt horizontally within ±45° and supports recording stable 4K/60 fps videos.

The Osmo Action 3 has full-color touchscreens on the front and rear so you can control the camera and playback your videos. The camera also has a new quick-release design so that you can switch easily between shooting regular and vertical video. The release mechanism uses a combination of magnetic force and a positioning clip.

Out of the box, the Action 3 is waterproof to over 50 feet. In addition, this increases to nearly 200 feet if you use the optional waterproof case. The camera can also record for up to 150 minutes in temperatures as low as -4 degrees F (-20 degrees C). The front screen, rear screen and lens protective cover are all made with high-strength Gorilla Glass. This is wear-resistant, scratch-resistant, and can withstand a drop from around 5 feet (1.5 m). In addition, the glass has a hydrophobic coating that repels water quickly without affecting image quality.

The Osmo Action 3 has a new 1770 mAh Extreme Battery, so you can record for up to 160 minutes. The camera also natively supports fast charging. DJI says that you can charge the battery from 0 to 80 percent in only 18 minutes and a full charge in 50 minutes. The Action 3 also has an improved heat management system. DJI says that this means you can record continuous 4K/60 fps video until the battery runs out of power.

The Osmo Action 3 uses three-mic stereo recording to reduce wind noise and boosts the audio quality. You can also livestream over Wi-Fi at 1080p/30 fps, 720p/30 fps and 480p/30 fps. In addition, you can remotely control the Action 3 with your voice. DJI says that the camera recognizes voice commands with a high recognition rate.

Linking your Osmo Action 3 to the DJI Mimo app unlocks even more features. InvisiStick for Skiing uses cloud computing and AI algorithms to remove the selfie stick from your skiing and snowboarding videos. In addition, the LightCut video editor app is optimized for use with the Action 3. It can automatically select clips and intelligently match them with exclusive templates to generate ready-to-share video edits.

The Osmo Action 3 has a great set of features. It also has a D-Cinelike Color Mode you can use for video, slow motion and timelapse modes. This is useful if you want more latitude for color grading in post-production. Together with the recent launch of the GoPro HERO11 Black, anyone in the market for a new action camera is spoiled for choice right now. 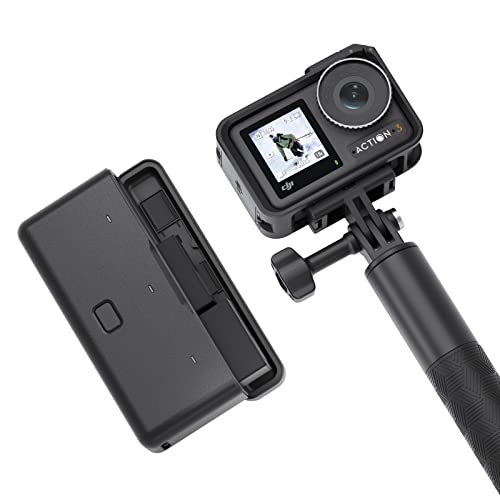