DJI has launched a new gimbal, the DJI RS 3 Mini. It’s the first-ever mini gimbal in the RS series and is designed for mirrorless cameras.

DJI has developed a new compact design for the RS 3 Mini, which means it is about half the size of the RS 3 Pro when in use. The battery is also integrated rather than being removable, as with the larger DJI gimbals. In addition, the RS 3 Pro has a native vertical shooting capability which is a clear indication of the target market.

In its native Portrait mode, the RS 3 Mini weighs only 1.75 pounds (795 g). The horizontal shooting plate adds a little weight, but the gimbal is still only 1.8 pounds (850 g) in that configuration. All of this means that the RS 3 Mini is around 50 percent lighter than the RS 3 Pro and 40 percent lighter than the RS 3. In addition, DJI says that the RS3 Mini has a concentrated center of balance to give a more stable and ergonomic hand-held experience.

Despite its small size, the gimbal has an impressive payload capacity of 4.4 pounds (2k g). In practice, this means the gimbal can easily handle cameras such as the Sony A7S3 paired with the 24-70 f2.8 G Master lens. In addition, the RS 3 Mini has high-torque motors, so it will keep your footage stable even when you zoom in to the maximum focal length.

The RS 3 Mini uses the same third-generation RS stabilization algorithm as the RS 3 Pro. This means you will get stable footage even when running, shooting low-angle shots or filming in flashlight mode. You can also circle or track your subject with the RS 3 Mini, as well as create a 360-degree roll move.

The gimbal has a button to switch between Pan Follow, Pan and Tilt Follow and FPV mode. The gimbal also has a 1.4-inch full-color touchscreen, so you can adjust most functions and access common settings. In addition, the gimbal has a front dial that you can use to adjust your camera’s focus, ISO, aperture and shutter. If you use the Ronin app, you can access even more features, such as timelapse, track and panorama.

The RS 3 Mini comes with a new dual-layered quick-release plate. The upper plate also has a curved placement guide that prevents the camera from rotating and loosening. In addition, it’s compatible with tripods that use the ARCA standard. The RS 3 Mini has a NATO port which means you can add accessories such as a briefcase handle, fill light or monitor.

DJI incorporated the same Bluetooth shutter control that was first used on the RS 3 Pro. This means you can start and stop your video recordings from the record button on the gimbal. With supported Sony cameras and lenses, you can also control the lenses’ optical or digital zoom via the front dial.

The gimbal’s integrated battery grip gives you up to 10 hours of runtime. In addition, you can recharge the gimbal in as little as two and a half hours. You can also use the gimbal while it is charging.

Overall, the RS 3 Mini is an exciting new addition to DJI’s RS series of gimbals. The native vertical shooting mode of the gimbal shows that it is aimed at vloggers and content creators. Even so, it is still a great gimbal for filmmakers working with mirrorless cameras and even supports cameras such as Sony’s Netflix-approved Cinema Line FX3. You can’t use advanced accessories such as the Ronin Image Transmitter or LiDAR focusing system. However, the RS 3 Mini’s lightweight makes it ideal for solo shooters who want to be able to shoot all day.

The DJI RS 3 Mini gimbal is available now and costs $369. 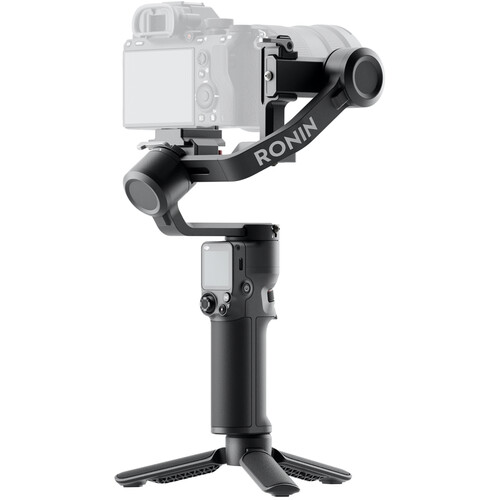