DJI has launched their newest camera, the DJI Action 2, with the bold claim that they have reimagined what an action camera can do.

The DJI Action 2 is tiny, weighing under 2 ounces. It features a new magnetic modular design. Starting with the basic camera module, you can quickly swap out modules and accessories. This allows you to adapt your camera setup to your needs and the shots you want to capture.

The camera in DJI’s Action 2 has a 1/1.7-inch sensor and a super-wide 155° field of view lens. You can film up to 120 frames per second (fps) in 4K and 240 fps in 1080p — for great slow-motion shots. Additionally, the camera’s color temperature sensor ensures natural color tones in complex lighting situations, such as underwater.

The camera unit has a 1.76-inch OLED touchscreen which DJI redesigned for ease of use. When you hold down the power button, the SnapShot feature will turn the camera on and begin recording in just one second. The camera also has upgraded voice control. This means if you want to start recording, you can just tell the camera to do so.

You can set up the DJI Action 2 to shoot timelapse and hyperlaspe recordings. In addition, the QuickClip function sets the camera to capture 10, 15 or 30-second videos — which are ideal for social media. You can use the Action 2 to broadcast a livestream at up to 30 fps at 1080p as well.

The power of the Action 2 lies in its modular design and configurability. The front touchscreen module adds an additional OLED screen so you can perfectly frame your selfies. It also adds three microphones to the one in the camera module to give 4-mic Matrix Stereo. In addition, adding the front touchscreen module more than doubles the battery life, increasing the run time from 70 to 160 minutes. Its power module raises that even further, maxing out at 180 minutes.

You can connect the DJI Action 2 to the DJI Mimo app on your mobile device via Wi-Fi or Bluetooth. With the app, you can view a live feed from the camera. The app also includes an intuitive AI Editor, which can automatically create dynamic videos from your shots by adding transitions and upbeat music. 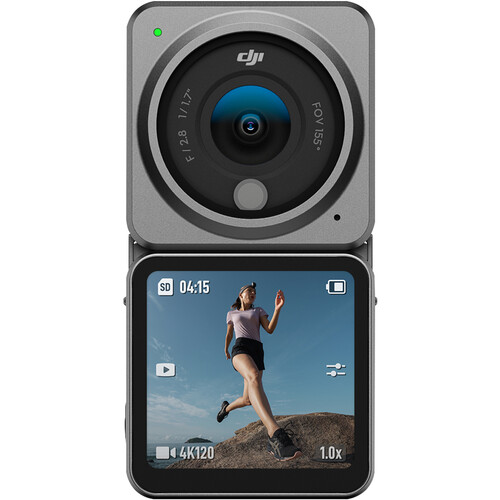