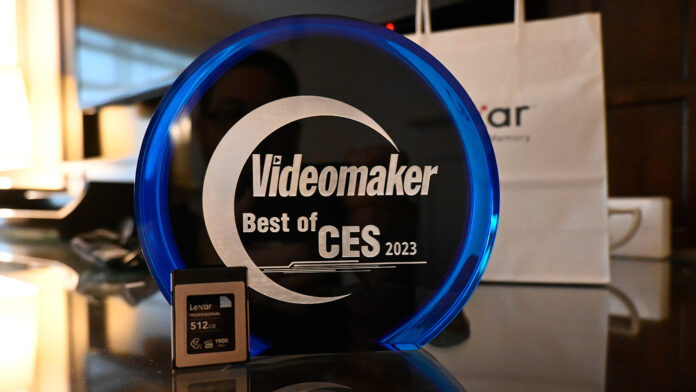 Congratulations to Lexar Professional for taking home our Best Media Award at CES 2023 with its 512GB Professional CFexpress Type B Card DIAMOND Series.

With the new card, Lexar promises read speeds of up to 1900 MB/s in addition to write speeds of 1700 MB/s. It has a minimum sustained write speed of 1600MB/s. With these impressive speeds, Lexar is targeting professional filmmakers and content creators. Lexar claims the card will “dramatically accelerate your post-production workflow for enhanced productivity.”

Designed to be reliable

The new 512 GB CFExpress card supports PCIe Gen 3×2 and NVMe high-speed protocols, as well as VPG 400 specification for professional-quality video. With these, the card can handle high-quality video capture, including RAW, ProRes and 8K video over a sustained period of time.

In addition to being fast, the new CFExpress card is designed to be shock and vibration-proof. This should help prevent damage during transport. The card is also resistant to extreme temperatures, making it suitable for use on remote filming locations.

The DIAMOND Series card is also backward compatible with some XQD cameras with the appropriate firmware.

“Lexar has a long history of providing industry leading memory solution for professional users and we are excited to continue this tradition with the world’s fastest Lexar Professional CFexpress Type B Card DIAMOND Series. This card will dramatically help professionals speed up their workflow while providing the quality, performance and reliability they’ve come to expect from Lexar,” said Joel Boquiren, General Manager of Lexar.

Pricing and availability are not yet available for the 512GB Professional CFexpress Type B Card DIAMOND Series. Stay tuned for more details. In the meantime, you can learn more about Lexar’s DIAMOND Series at lexar.com.