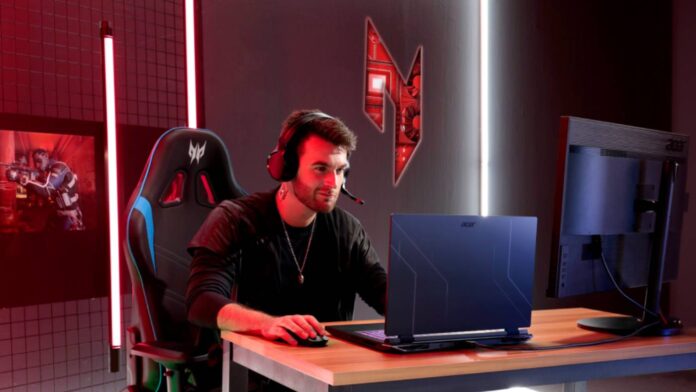 Along with Acer’s other announcements at CES this week, the brand also revealed the Acer Nitro 5 gaming laptop and Acer Predator X32 gaming monitor. Here’s a look at what this new gaming hardware has to offer.

The Acer Nitro 5 gaming laptop comes equipped with up to either a 12th Gen Intel Core or AMD Ryzen 6000 series processor. The new gaming laptop also includes NVIDIA GeForce graphics up to the RTX 3070 Ti.

Inside, you’ll also find two M.2 SSD slots using PCIe Gen 4. That’s along with up to 32 GB of DDR5 4800 MHz RAM, depending on the configuration. Acer promises this will leave gamers with plenty of power for multitasking.

As for the display, the Nitro 5 offers two options: FHD 144 Hz panel or a 165 Hz QHD Panel. Again, available options will depend on configuration, specifically processor choice.

Regardless, the Acer Nitro 5 comes with Windows 11, a redesigned chassis with dual-fan cooling and a full range of handy connection ports.

Moving on, the Predator X32 is a 4K IPS gaming monitor with a 160 Hz refresh rate and 576-zone miniLED local dimming. With a Delta E<2 color accuracy rating and 99% coverage of the AdobeRGB color gamut, this new monitor promised to deliver clear, smooth and color-accurate imagery.

The upgraded version, the Predator X32 FP, ups the refresh rate to 165Hz (overclocked) and drops the response time to 1ms. That makes it the fastest 4K monitor currently available, according to Acer. The X32 FP also adds an HDMI 2.1 port. This allows for display from a console as well as a PC.