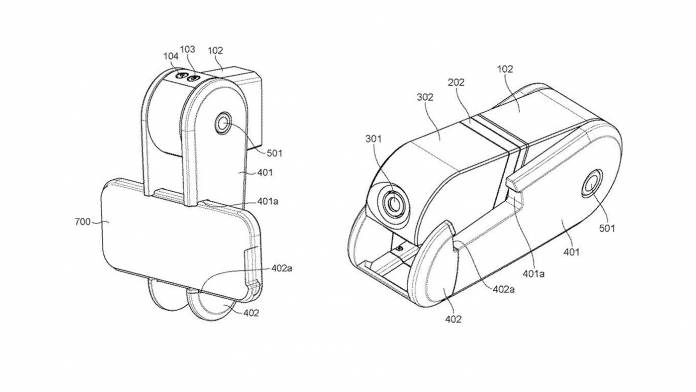 A new Canon patent has recently been spotted, offering insight into the company’s apparent plans to develop a smartphone tool to enhance your device’s ability to take photos and video.

First found by Canon News and later reported on by publications like PetaPixel, a patent dating back to July 15, 2021 reveals blueprints for “an imaging device” that resembles a telephoto camera accessory designed for smartphones. Canon has yet to confirm the development of any such device and likely won’t. But from the looks of it, Canon may be attempting to build an attachable camera for your smartphone complete with the ability to swap lenses, be operated remotely and work entirely on its own if need be.

It’s all strictly speculation at this point, so you’d be advised to take all of this with a grain of salt. That being said, here are a few inferences about Canon’s unannounced product based off of the details in this newly-discovered patent.

It’s less of an accessory, more of a standalone device

A quick Amazon inquiry opens the door to an overwhelming amount of clip-on camera kits for smartphones. In a nutshell, they’re add-on, inexpensive smartphone tools that aim to improve the capabilities of your phone’s built-in camera.

This mysterious Canon product is not that. Or, at least, it doesn’t seem to be. With features like onboard storage for JPEG images and video files, as well as a processor that’s allegedly capable of adjusting various settings like color space conversion, gamma conversion, white balance and more, it’s fairly clear that this will be an actual camera rather than an accessory to an existing camera.

While the designs do depict a spot meant for a smartphone and the product to connect to each other, it sure seems like the phone will be attached to this device rather than the other way around. From the extremely limited information currently available, the smartphone in this setup will likely act as a field monitor rather than the device that’s actually capturing photos and video.

It will likely be a niche, not-cheap addition to Canon’s lineup

As PetaPixel points out, Canon is no stranger to out-of-the-box devices. The PowerShot Zoom, a $300 telephoto monocular, and the PowerShot PICK, an AI-powered camera that will supposedly survey environments and automatically take pictures, are just a few recent examples of Canon’s oddball additions to its roster. This new device would certainly fall into that category, though it may prove more useful than either of its predecessors.

It also won’t be cheap, at least not if it falls in line with the PowerShot Zoom or the PowerShot PICK (which is said to ship with a price tag around $400 later this year).

Will creators who primarily use their smartphones to capture content be intrigued enough to spend this kind of money on a smartphone tool like this? Maybe! There honestly aren’t enough details to make any kind of determination here. Without a release date (or confirmation, for that matter), the only thing to do is wonder about the possibilities of Canon’s creative new project.