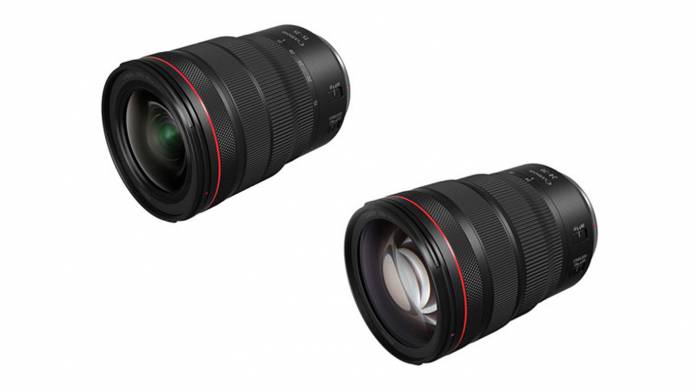 The RF15-35mm F2.8 L IS USM and RF24-70mm F2.8 L IS USM both sport a large F2.8 aperture. Additionally, they offer a zoom range “that covers a wide range of shooting scenes and image stabilization,” according to Sony.

“As the emergence of mirrorless cameras continue accelerating the market and with Canon’s deeply rooted heritage in optics, we are excited to expand the lens offerings and acquiesce the needs of EOS R users,” said Kazuto Ogawa, president and chief operating officer, Canon U.S.A., Inc. “The technical improvements and features within these new RF lenses are needed to drive the market forward.”

Now let’s take a look at these lenses:

This is Canon’s first-ever F2.8 wide zoom lens equipped with IS for full-frame with a CIPA standard of five stops. According to Sony, the RF15-35mm achieves “edge-to-edge sharpness” throughout the zoom range.

Additionally, Canon claims the lens achieves high image quality due to its large-diameter mount and shorter back focus of the EOS R system. The size of the lens equals the same as the existing EF lens. However, it allows for IS, wider field of view, and the control ring indicative of the RF lenses.

Lastly, the lens is drip and dust resistant.

The RF24-70mm comes equipped with IS, while claiming to be useful in a number of shooting situations. For instance, Sony says the lens is meant for shooting in scenarios from street scene snapshots to full movie shooting.

In terms of size, the lens is equivalent to the size of the EF counterpart but with Image Stabilization. In addition, the RF24-70mm uses a Nano USM motor and “silent” focus.