One of the big announcements at Apple’s online spring event was the new Apple Mac Studio. Mac Studio is a new high-performance desktop computer with a very compact form factor.

Systems on a chip

Apple is launching Mac Studio in two versions — based around either the Apple M1 Max or their brand new Apple M1 Ultra chips. The M1 Max and M1 Ultra chips are branded as “Systems on a Chip” by Apple. This is because they integrate components such as the CPU, GPU, unified memory architecture (RAM), SSD controller, encode/decode engines, Thunderbolt controller with USB 4 support and more. Apple claims that the M1 Ultra is the most powerful chip ever in a personal computer.

The M1 Max-based Mac Studio has a 10-core CPU and 24-core GPU. This means that it delivers up to 2.5 times faster CPU performance and 3.4 times faster GPU performance. Apple states that it can play back up to 9 streams of 8K ProRes video.

Both the M1 Max and M1 Ultras systems support up to 5 displays. These can be up to four Pro Display XDRs over USB-C and one 4K display over HDMI. In addition, both systems deliver hardware-accelerated encoding and decoding for H.264, HEVC and ProRes video files. They can also support up to 8 TB of SSD storage with read speeds of up to 7.4 GB/s.

Somehow, Apple has managed to fit all of this power into a 7.7 inches square and only 3.7 inches high. From the images released by Apple, it seems that around half of the case is filled with a cooling system, which the company says is whisper quiet. The front of the case has two USB-C or Thunderbolt 4 ports and an SDXC card slot. In addition, the back of the case has four Thunderbolt 4 ports. There are also 2 USB-A ports, a 10 GB ethernet connection, an HDMI socket, and a 3.5 mm headphone jack. 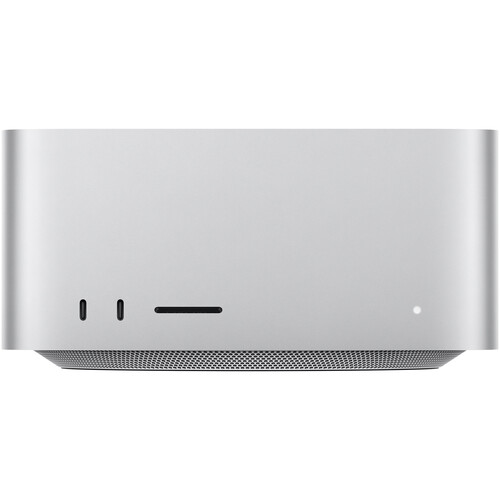