Sure, it’s not a perfect 360 camera. However, it’s not often you’ll get the features the Insta360 ONE has for under $400. With 4K video recording at 120 frames per second and 24 megapixels of still capture, the Insta360 ONE could be perfect for filmmaking, live events, and video marketing.

What is the ONE?

The Insta360 ONE can be used as both a standalone action camera and as a mobile attachment. The camera can additionally record to a microSD card, allowing users to transfer and edit files that way. Videos that go over 4GBs are automatically stored in multiple separate files.

There’s a number of support options available for the ONE, including a tripod, a suction-cup case, a helmet, and waterproof housing for underwater protection at depths of up to 30 feet. You can also opt to get the selfie stick to use the ONE’s key feature: the “bullet time” effect. To achieve this effect, you must attach the ONE to a selfie stick (or the company’s string attachment) and actually swing the camera overhead. The resulting effect creates what looks like a 360 pan around whoever is swinging the camera. The camera’s software also impressively removes the selfie stick with its stitching algorithm. Note, however, the algorithm doesn’t remove the shadow of the selfie stick, so that will still be present in the shot.

The ONE is one of the most feature-rich 360 cameras out there for under $500 bucks, being comparable to the Ricoh Theta V. When it comes down to it, a 360 camera without 4K support isn’t worth buying. Lower than 4K resolution and you’re left with video that lacks sharpness and detail. Luckily, the ONE sports 4K UHD video at up to 120 frames per second, making its video immersive enough for viewers to not be taken out of the 360 experience. The ONE can also live stream in resolutions up to 4K.

Getting started with the ONE was fairly easy. All of the camera’s functions are controlled by a single button. Yep. One button. To turn the camera on, you just hit the button once and it powers on. Once it’s on, hit the button once to take a 360 picture, hit it twice to record a 360 video — hit it once again to stop recording — and then hit the button three times to use bullet time video. You can, however, set the triple tap setting to other modes like time-lapse or a timer.

The ONE’s simplistic one-button design is one of its highlights. It’s easy for anyone to pick it up and use. It’s also one of the camera’s nuisances. If the camera isn’t attached to a device, it’s hard to keep track of which shooting mode it’s in.  Though there is an indicator light on the camera, it can still be difficult to tell if it’s shooting videos, photos, or if its in standby. There’s also no way to preview shots with the ONE on its own. These issues are resolved, however, when it’s connected to an iOS or Android device, either physically or via Bluetooth.

The ONE’s simplistic one button design is one of its highlights. It’s easy for anyone to pick it up and use. It’s also one of the camera’s nuisances.

After the initial impressions, we connected the ONE to our office iPad. The Insta360 app downloaded quickly and was ready to use in under two minutes. Once in the app, it operates just the same way any smartphone camera app would work. You can choose to either shoot photos or videos. Once you have the setting you want to shoot in, you simply click the record button. What’s nice is that you can pan through the 360 frame even before recording. You can also zoom in and out to really nail your framing — which is essential in 360 video, since every angle is being recorded. The app can also digitally stabilize shots to a pretty impressive degree with FlowState stabilization, making videos that could look like a floppy mess — especially hyperlapse video — look much more smooth and stable.

The app additionally can track subjects and you can also choose to turn your 360 video into a regular video by selecting what parts of the scene are visible. Going one step further, you can also create automated camera moves between points in your video using the app’s pivot point feature.

The overall image quality captured by the ONE is fairly satisfactory. It captures enough detail for its videos to be edited with fairly good contrast. The camera does, however, struggle in some situations with sunlight — images are blown out in the presence of too much light. Also, some noise is present in dark shooting conditions.

One of the best aspects of the ONE is its portability. The device itself is lightweight and easy to mount onto a tripod or mount — we were able to mount it to a handheld grip within seconds. We do have some issues with the hard carrying case the ONE comes with. While it does provide some adequate protection for the camera, its design is questionable. The multi-use button on the camera is inconveniently placed right where you’d put your thumb to pull the camera out of the case. There’s a high probability that you’ll accidentally turn the camera on — it happened to us multiple times — and drained the battery. The case can also act as a stand or grip for the camera, and it’s a nice touch if you aren’t doing anything too extreme. We wouldn’t trust it as a grip hold if you were to do anything super athletic with it because there’s nothing securing the camera to the case. We don’t recommend risking it.

Priced at a slightly higher $430, the Ricoh Theta V offers video shooters 4K shooting in 29.97 frames per second with a 2 x 1/2.3” CMOS sensor and can take 12 MP stills. Like the ONE, the Theta V charges through USB and doesn’t have a removable battery pack. Both cameras are considered consumer products, so the same recommended users could be happy with either camera, though the Insta360 does offer some exclusive features like FlowState stabilization.

Another comparable 360 camera is the GoPro Fusion. While it more than doubles the price of the ONE, the Fusion can shoot 5.2K in 30 fps and up to 60 fps in 3K. As for stills, it can shoot up to 18MP and can be controlled with or without an app. Its battery pack is removable, and the camera captures to two micro SD cards. The Fusion is much more advanced than the ONE, so those that are considering the ONE — or even the Theta V — the Fusion may not be the camera for you, and vice versa.

Insta360’s ONE packs a lot of good into a very affordable package. While more advanced video shooters may long for a more comprehensive 360 shooting experience, consumer shooters or 360 beginners could find the ONE to be the perfect camera for them. It’s easy to operate and can capture some good looking shots. There are some minor setbacks, but it’s undeniable that the ONE is a good consumer-level 360 camera.

The Insta360 one packs a lot of features into a portal, easy to carry design. While it’s not perfect, it offers a lot of great features at an undeniable $300 dollar bargain. 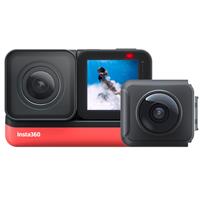 Sean Berry would be hesitant to swing around a $300 dollar camera on a string, but he’d still do it of course! He’s also a Contributing Editor at Videomaker Magazine.