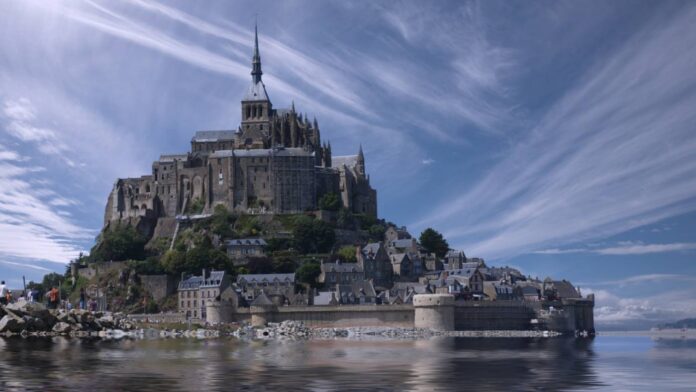 An establishing shot serves as an introduction to the story that’s about to unfold. It’s usually, but not always, the opening shot of a scene. Typically a wide exterior shot of a building or landscape, the job of the establishing shot is to situate the characters in a particular setting. It’s a cinematic shorthand that allows filmmakers to quickly communicate the underlying context of a scene to the audience.

Every inch of space in a film or TV show is constructed intentionally to serve the narrative. That means the space we see and understand on-screen could be completely different from the location or soundstage used for filming. That’s why the establishing shot is so important. Without it, the audience has no way to orient themselves within the scene. It’s how we know where the characters are.

Sitcoms like “Seinfeld” (1989-1998) or “The Simpsons” (1989-present) frequently use wide exterior shots of the main characters’ residence. This communicates to the audience that the story has returned to this familiar location. The consistency of this kind of establishing shot is especially important in sitcoms since the stability and routine of home life grounds Kramer or Bart’s whacky episodic adventures.

On the other hand, establishing shots can emphasize the unfamiliar nature of the landscape. Westerns often use grand scenic vistas to connote the loneliness and inhospitality of the wild west. Similarly, space sagas often use establishing shots to introduce spacecraft that are strange and massive, yet completely isolated. In both cases, the establishing shot gives the viewer a chance to consider how the characters might interact with these alien environments.

Location isn’t the only important piece of information to be gleaned from establishing shots. These shots can also tell us when the story or scene takes place. A good establishing shot tells us more than just the time of day; it can also reveal the season as well as the historical period in which the story takes place. For instance, “Amadeus” (1984) sets the scene with a dark shot of a carriage on a snowy street. A row of windows glows faintly in the background. This simple static shot tells us that our story starts in the pre-industrial era during winter at night.

A series of establishing shots can also communicate the passage of time. The same exterior shot of the same building captured at different times of day or year can convey the passage of time or the shifting tone of the narrative. One oft-cited example of this is the establishing shot of Hogwarts in the “Harry Potter” series. Each time we revisit this shot, we see a different season and understand that some time has passed since the last scene.

For example, think of the mansion that looms over the Bates Motel in Hitchcock’s “Psycho.” The consistent low-angle shot from a distance hints at the sinister nature of the house and its occupants long before we are ever allowed inside.

By contrast, the frat house from “Animal House” (1978) is even more decrepit. However, the framing, blocking and animated figures in the window help the house appear significantly less menacing.

To understand why the establishing shot is so effective, we can think back to the Kuleshov effect. In this famous cinematic demonstration, Russian filmmaker Lev Kuleshov showed how viewers make unconscious associations between shots. For example, a shot of a man cut with a shot of a bowl of soup conveys hunger, while the same shot of a man cut with the image of a beautiful woman connotes lust.

In the same way, when we see an exterior shot of a building cut against an interior shot, we assume these two shots are describing the same unified space. We saw the outside of the building, and now we are seeing the inside — never mind the fact that the interior shot likely took place on a sound stage and the exterior establishing shot might be borrowed from a stock footage library.

When not to use an establishing shot

As we’ve discussed, an establishing shot can convey a lot of information at once. However, sometimes the story calls for us to withhold that information from the audience.

This strategy can be used for drama — for instance, to build up the reveal of hundreds of fallen soldiers in “Gone with the Wind.” Or, it can be used for comedy, like when the camera pulls back from Po climbing a huge set of stairs to reveal he’s only steps from where he started.

Also note that you don’t always need to place the establishing shot at the very beginning of the scene. In “Django, Unchained” for instance, the opening scene alternates between close-ups of the titular character and wide shots of the rocky landscape, introducing us both to the character and his environment.

Whether static exteriors or soaring drone shots, the most effective establishing shots flow seamlessly into the rest of the scene. They match not only the place and time but also the tone of the tighter shots. These brief but essential shots pack in narrative details and symbolism. There are many ways to describe a location, so make sure your establishing shots highlight the aspects of the setting that are most relevant to your story.